In the last three years, we have gone national by organising the cleanup in other cities too. In Chennai, CCC has become more than an annual event. It has been extended to cover clean-up of river, lakes and other waterbodies and also creation of ‘zero-waste communities’.

Shoring up a cleanliness movement 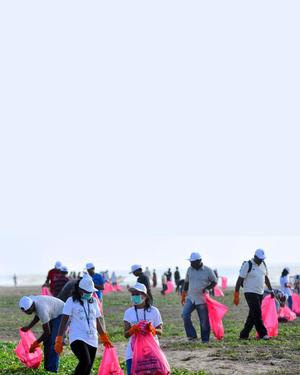 The Hindu MetroPlus talks to a few organizations who have been participating for several years in the Chennai Coastal Cleanup
Ahead of the eighth edition of Chennai Coastal Cleanup, which falls on June 18, when the city’s shoreline will be cleared of garbage by thousands of volunteers, we connect with corporate groups that have become almost integral to the initiative
A volunteering initiative can be considered a rip-roaring success when its facilitators have to turn away some volunteers to maintain a logistically manageable number.
This year, when Mahindra & Mahindra Limited at Mahindra World City in Paranur called for registrations from its employees for its annual coastal clean-up programme, the response was overwhelming.  “For the last few days, many are signing up for the clean-up. We are in the unenviable position of having to say ‘no’ to some of them. For better coordination, we will settle on 150 volunteers,” says C. Sankaran, senior manager (administration), who is driving the ‘Employee Social Options’ initiative at the company.
Read more –
http://www.thehindu.com/todays-paper/tp-features/tp-downtown/shoring-up-a-cleanliness-movement/article19079380.ece