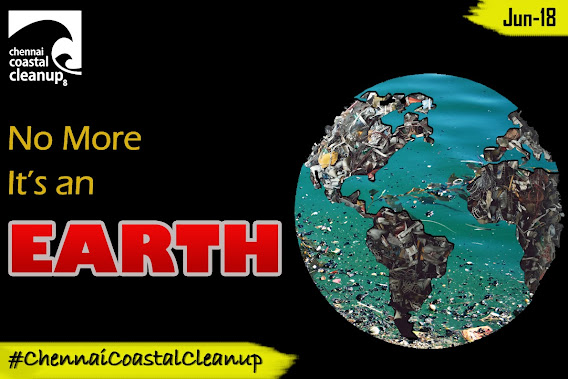 Factoid 1 – Plastic is an epidemic. It is a necessary evil. It is at our fingertips – Plastic Keyboard, Plastic mouse , mobile phones etc…. !
Factoid 2 – Most of the plastics we use end up in waterways. Giant garbage patches can
be found floating around in the oceans !
Factoid 3 – Over the last ten years we have produced more plastic than during the whole
of the last century !
Factoid 4 – 50 PERCENT OF THE PLASTIC WE USE, WE USE JUST ONCE AND THROW AWAY ! NOT A CAPITAL THING TO DO !!
Factoid 5 – Enough plastic is thrown away each year to circle the earth four times. And
We recover only 5% of the plastics we produce !
Factoid 6 – Plastic accounts for around 10 percent of the total waste we generate !
Factoid 7 – The production of plastic uses around eight percent of the world’s oil
production!
Factoid 8 – We throw away at least 100 billion plastic water bottles every year!
Factoid 9 – Annually approximately 500 billion plastic bags are used worldwide, more than a million bags every minute
Factoid 10 – 46 percent of plastics float and it can drift for years before eventually concentrating in the ocean gyres
Factoid 11 – It takes 500-1,000 years for plastic to degrade !!
Factoid 12 – Plastic constitutes approximately 90 percent of all trash floating on the ocean’s  surface, with 46,000 pieces of plastic per square mile.

Factoid 13  – The Great Pacific Garbage Patch is located in the  North Pacific Gyre off thecoast of California and is the largest ocean garbage site in the world.  This floating mass of plastic is twice the size of Texas in America (To put it in the Indian context, twice the  size of that is entire South India plus Odisha !!).
Factoid 14 – There, in that patch ,plastic pieces outnumber sea  life six to one !!
Factoid 15 – And there are many more such patches in the other oceans !!
Factoid 16 – One million sea birds and 100,000 marine mammals are killed annually from plastic in our oceans.
Factoid 17 – 44 percent of all seabird species, 22 percent of cetaceans, all sea turtle Species and a growing list of fish species have been documented with plastic in or around  their bodies.
Factoid 18 – Virtually every piece of plastic that was ever made still exists in some shape or form somewhere on this planet
It’s time for action! Join Chennai Coastal Cleanup/8 on June 18th – individuals,organizations