Skip to content
April 12, 2017 Peter Van Geit Leave a comment
The plantation activity on April 1st was a fun-filled, hands-on, learning experience. We got to play and work with mud, which took us back in time to the good old childhood days. Under Prasanna’s guidance and company of like-minded souls like Manoj, Balaji, Ashwin, Geeta, Deepak Sam, Siddharth, Raghu Ram, Pradeep, Suresh, Mari, Indira, Siva, Vikram, Thomas….etc. and enthusiastic company of young ones – Ojas and Tarunika, we learnt that growing vegetables can be easy and fun, apart from giving us organic and fresh food.
Let me tell you from the beginning J.
My alarm clock buzzed at 4:30 am. With all enthusiasm, I and Vivek got ready quickly in half an hour.
Ojas, my four year old son was still sleeping.
I asked him – “Do you want to go for plantation?”
He woke up with his eyes still half-closed and said, “Yes”, with a smile.
We started in our car and reached the Guindy CTC meeting point, opposite Alandur Railway Station, at 5:30 am.
I coordinated with Deepak Sam at the meeting point. Geeta (2 years with CTC) and Vikram (it was his first outing with CTC) joined us in our car and we started to drive towards the plantation destination near “Avadi”. The drive was for 1 hr 15 mins, we relied on Google maps since none of us was sure about the route. Vikram helped Vivek with directions. They occupied themselves with talking mostly about Ashok Leyland, as they found they belong to same company. I had a nice time chatting with Geeta and knowing about her “Baking” interests. Ojas was all excited looking around and spotting things like a concrete mixer, a windmill, lake, and plants floating on the water. When he saw a beautiful lake on the way, in the excitement, he remarked, “We have come to Mauritius”. J  Geeta gave a cute name to him – “Mango Jelly”.
We lost our way once L, but with the help of maps we got back on correct route. 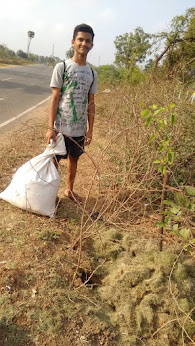 Geeta identified that we reached our destination by spotting CTCians who were carrying white sacks J. The white sacks contained the “mulching” which protects the saplings by adding a layer around the roots. This helps the soil to retain the water for a pro-longed period by not exposing it to direct sunlight. The “mulching” was the grass mowed from lawns of IT companies. We took our sacks and started to “mulch” the saplings. This time there were only few saplings for maintenance, so we could do a few till we found the work was almost finished. The government officials who are responsible for watering the saplings daily, were coordinating with CTC. Post mulching they watered the saplings.
Thus we finished the first phase of the plantation activity. I got to speak to few folks like Vasanth who is an entrepreneur working on a home solutions startup to create a solution for end-to-end “roti-maker”. Also got to know the reason for Balaji’s long hair which he grew to donate for cancer patients who undergo chemotherapy. After sharing biscuits we started for the next phase i.e. Growing Your Own Vegetables in the backyard of Thanigaivel’s home. Prasanna is passionate about farming and explained us the steps to grow vegetables which I have summarized below– 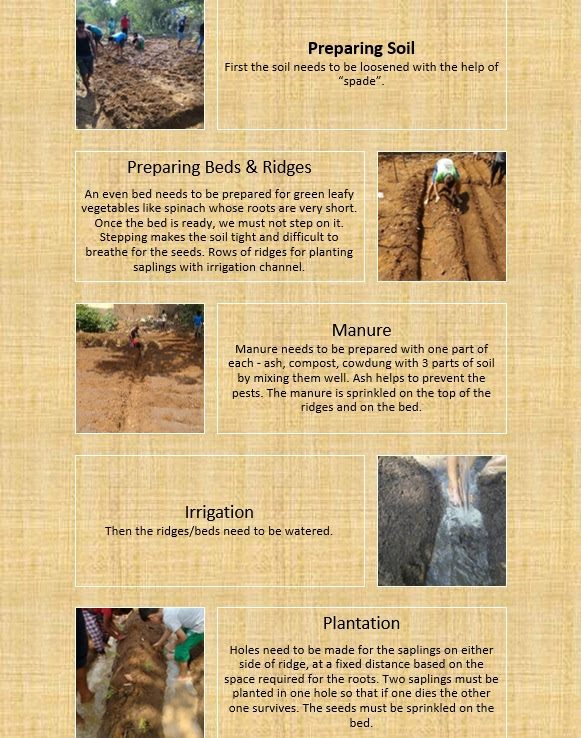 Ojas made a friend too, his cheerful and enthusiastic 6 yr old friend’s name was “Tarunika”. It was her grandfather’s backyard. Both “Ojas” and “Tarunika” did a good job at farming, both played in the mud, helped in watering and planting the saplings. We had saplings for tomatoes, chillies, brinjals etc. 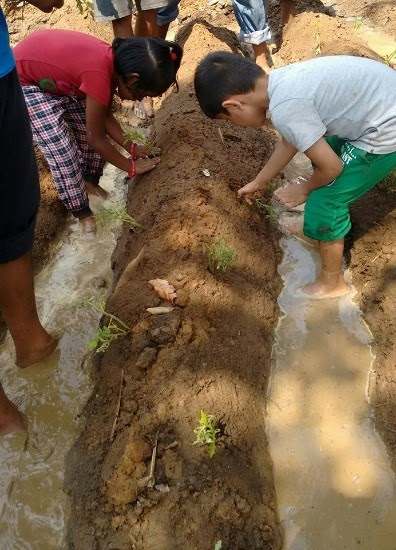 After the plantations, we took a break for breakfast. The breakfast consisted of “Koozhu” (in semi solid/liquid form made from Ragi, Rice, Curd and Onions) which was healthy and delicious at the same time. We savored every bit of it and thanked “Anita” and her family, for preparing such an awesome meal. There were other heavenly dishes like a beans tomato gravy with radish drumsticks and brinjal. One dry green veggie in gram flour. The fried chilies that were not spicy but tasted yumm. Also we had cut mango with salt and chilly, fresh from backyard’s mango tree. 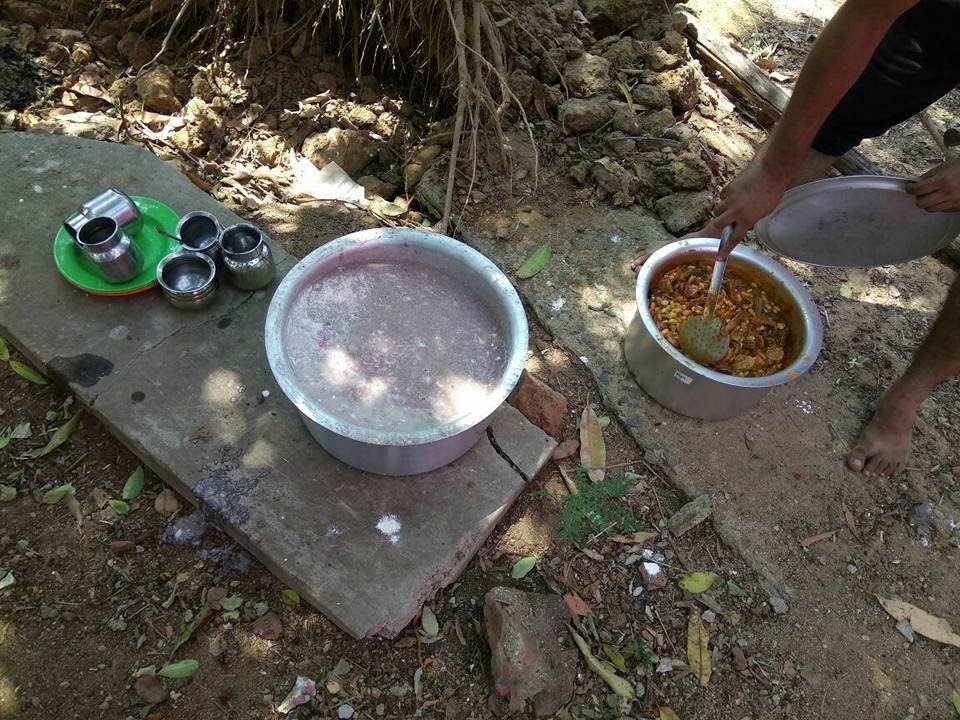 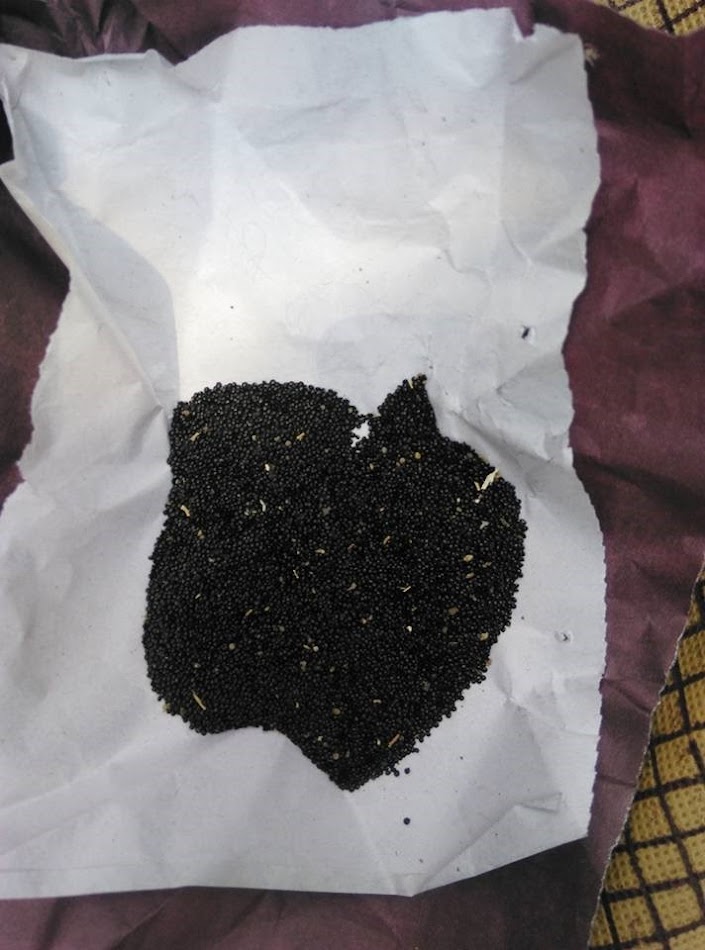 Prasanna along with others also prepared a small space with bamboos and strings that can provide support to creepers like snake gourds, bottle gourds etc. 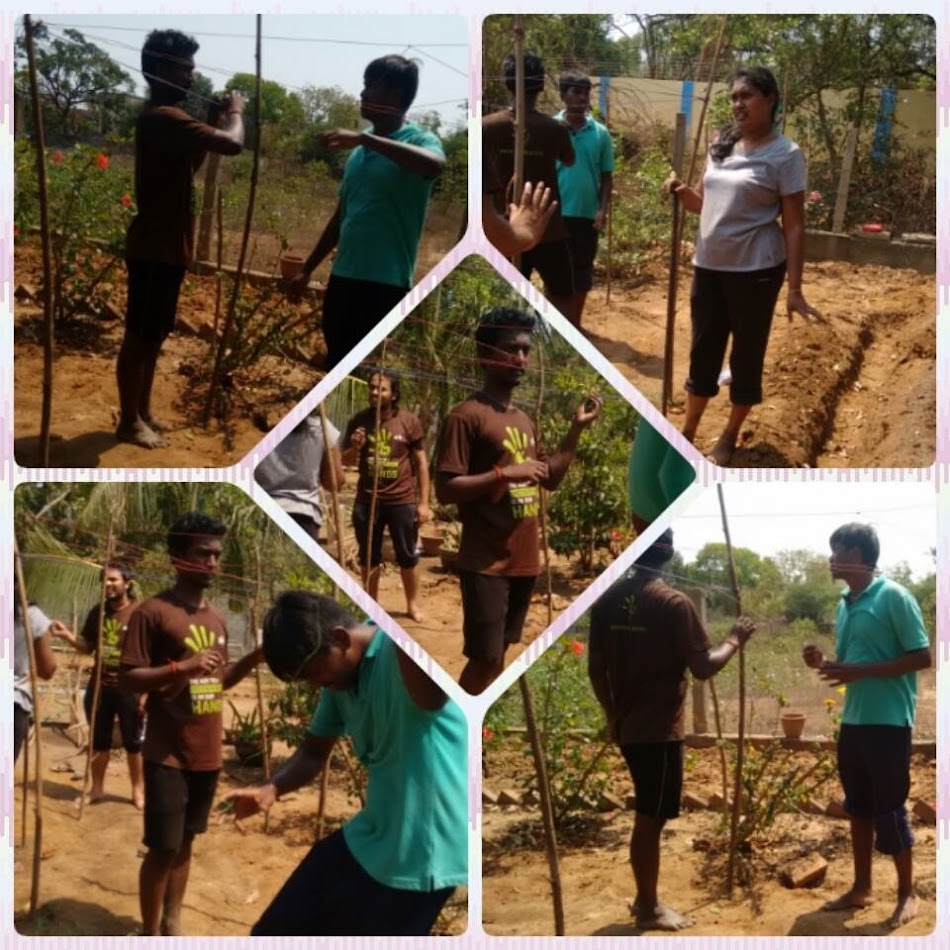