History Unexplained!!!
Well this title perfectly suits this trip.
Organisers: Vinoth and Siva.
Experts: Sasidharan and Anand Ram Bhaskar
My Title: Know your History! Know yourself!
Every time I visit any historical places, I only wowed by its archaeological designs, sculptures, structures, ancient engineering etc. but I got where few chances to get to know about the historical stories/values behind the scene.
I believed that this trip will help me understand more about our cultural values, the depth of our history, highest of management and science which we still trying to prove.
Day 1
It’s the trip day March 11, 2017 Saturday morning 8 AM; we reached the first place of the trip.
1.      Mandagapattu Cave Temple.
We have century’s old temples everywhere with mesmerising structures, designs and so on…, yes that is something we are proud of! But have we ever thought about its preliminary versions???
We know that Huts are the pioneers for skyscrapers. Likewise our ancestors have constructed the first version of temples with brick, wood, metal and limestone, but they lasted only for few centuries, but greater minds wanted to build temples which should last over time. And Mandagapattu Cave temple is the one of the outcome from their efforts.
It is a monolithic cave temple without any god idols and is said to be the first prototype of the Pallava rock-cut cave temple, built in the 7th Century by Mahendravarman I. It is very much surprising for me to see the way it is drilled with the help of ancient old equipment’s without any notable flaws.
To understand the value of  we should know basic mathematics. I am saying this because; Sasidharan explained each and every corners of that temple to make us understand better about the later structures in big temples. He well narrated about the embellishments and depiction of the door guardians. 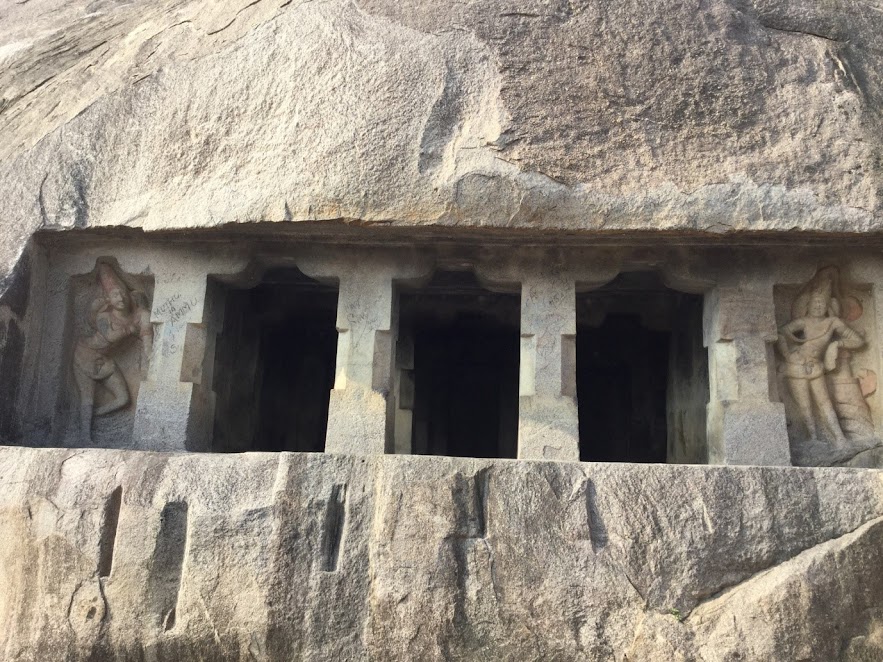 So what’s next? No, it’s not any the big temple. It’s an upgraded prototype of Mandagapattu Cave Temple.
1.      Thalavanur Cave Temple.
We reached the nearby spot i.e., Thalavanur Cave Temple, the moment we saw the carvings we could able to appreciate the difference between the earlier one.
Sasidharan started to explain about the improvements by comparing the two cave temples, and he explained the art works in-depth carved outside the Cave to identify and admire the beauty behind it.
This temple has many add-on features like, ornamented entrance, sharply carved door guardians, pillars with engravings, large medallions carved after the entrance and a lingam inside.
After Siva’s dharsan, we went straight upside the hill to see the rock bed’s crafted by Jain monks, who were said be meditated and rested there.
After few clicks, we were back in our unexplained historical trip to reach the next destination. 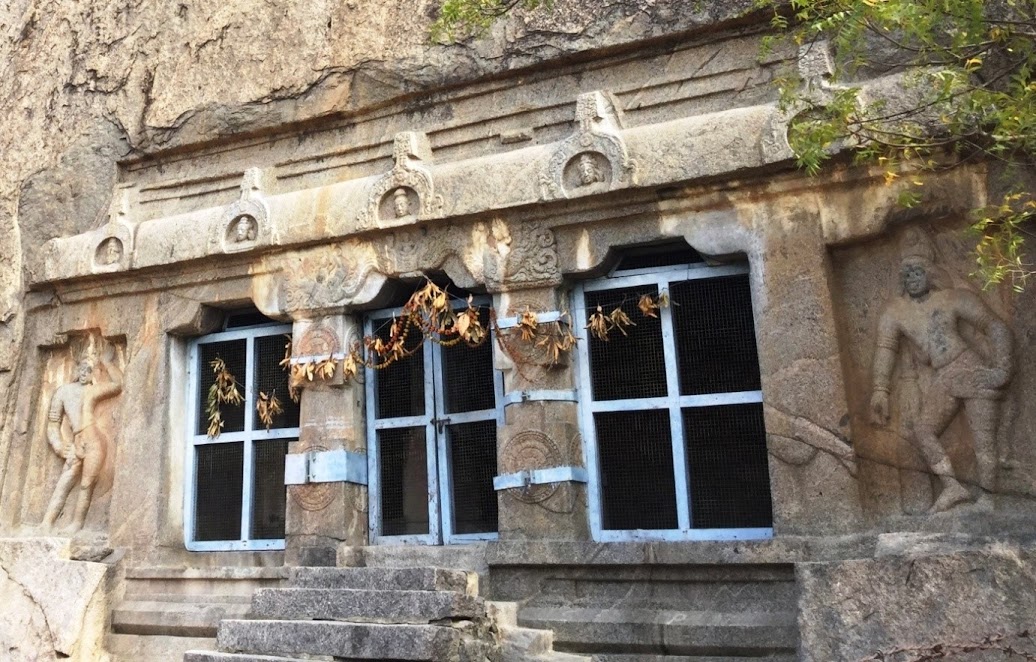 1.      Thanjavur Big Temple (Brihadeeswarar Temple).
I been there couple of times before with my family and friends, all we did was worshiping the God’s inside and listening to the stories which is commonly known. 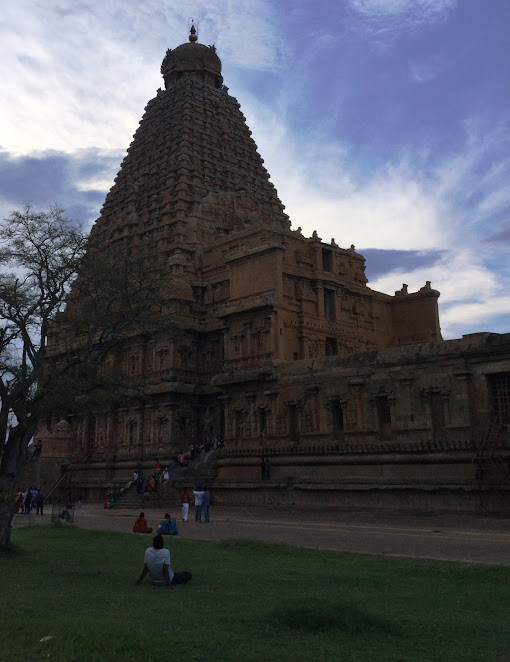 Starting from decoding the artistic works behind the door guardians till the writings at the walls of the Temple were well explained by Sasidharan & Co. He cleared few mysteries and cracked some improper information’s during his presentations. 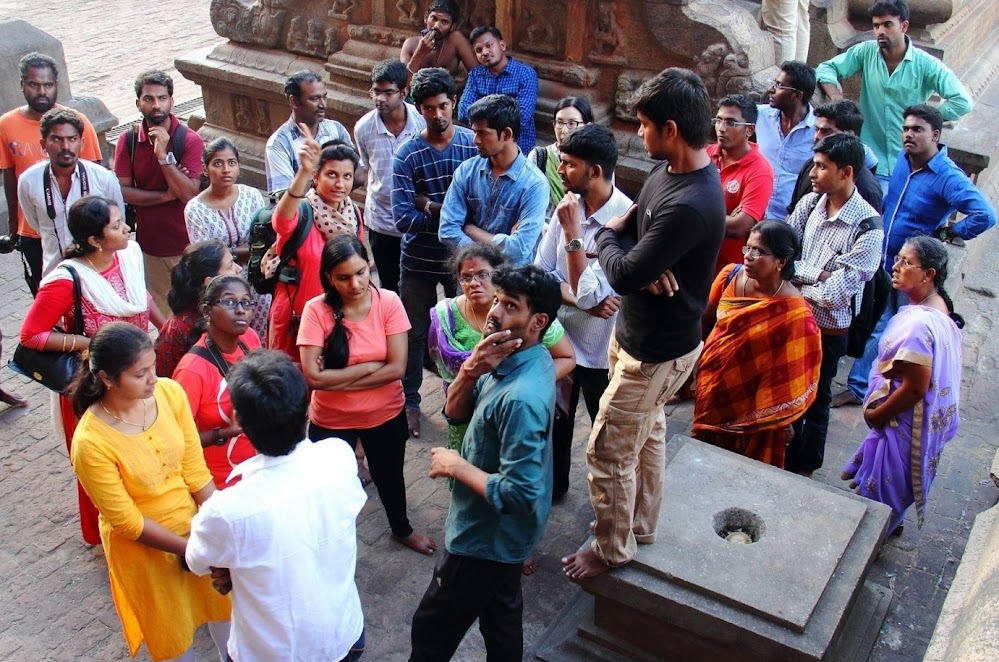 After listening to Sasidharan’s speech about the temples architecture, my perspective about it has changed.
They took only 4 years to complete building the temple, but 4 years may not be enough to understand the Chola’s wealth, power, art works, management structure & the level of strategies.
We reached the temple at 4PM, but by the time we finished it was 7. The organizers had other plans before completing the day 1 of the trip. So we moved on to the 4th place of the day.
1.       Thanjavur Palace.
We were not there to see interiors, complex and museum as the palace was closed by 5 PM. But we were there for Light & Sound show. Just like an open theatre we had a wonder evening time to listen to the story line of Greater Kings starting from “Karikala Cholan till the rule of British”. To put it simple, “it is about the ruling of Cholas and later kingdoms of Thanjavur and about the Palace”. The show runs for 45 minutes.
That’s all about day1, after few hours of night travel we reach Gangaikonda Cholapuram (GKC) for night halt.
Day 2:
Unless other CTC events, we had luxurious time to get ready in the morning.
1.      Gangaikonda Cholapuram Temple 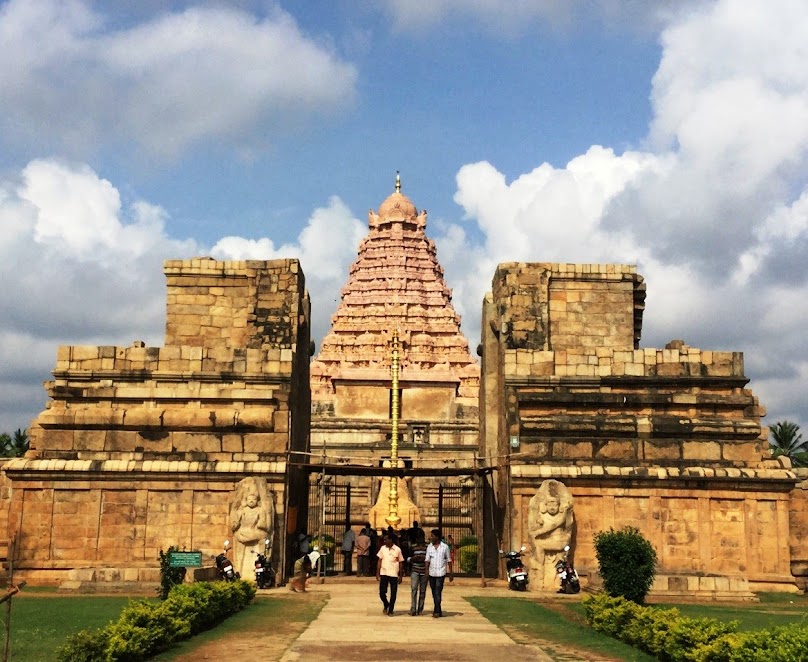 We already had 3 experts with us to explain the scenes, despite that we had 4th Person for GKC.
Sasidharan introduced Komagan sir. He is one humble, loyal and well knowledged person I met during this trip.
He started his lecture starting from the first entrance. He pointed out few markings on the ground to show the accuracy of the directions used by theengineers to build the Temple when there was no extinction of Compass. He asked for a phone with inbuilt compass and asked us to place it over the markings and no wonder the compass set upright exactly at Zero.
Likewise he explained science behind every design’s, story-lines behind every stone sculpture and temple structure with help of blue prints. We started at8:15 AM and finished at 1:15 PM. Komagan sir tried his maximum not to skip anything important about the temple and our crew showed equal interest to know more.
1.      GKC Maaligai Medu
After a slow lunch we reached the next destination, and Komagan Sir arrived before us to explain the scene. The place is like a small museum, where important but damaged stone sculptures, stone inscriptions about trade etc., is placed, after getting to know about the inscriptions we moved on to GKC Museum next to the temple where vessels, coins, nails, sculptures of chola’s period found nearby were kept for public view.
By 4:30 everything and everyone were packed inside to van for return journey. That’s all folks.
I have skipped many things starting from Vichitrachithan title till the Kali Statue at GKC temple. Explaining about the story line behind every sculpture’s will amount to writing a book, so it will be better to see these places in upcoming series under expert’s guidance.
Last thing:
Our history has greater values than we could imagine, we should take responsibility for taking it to our next generations.
I thank CTC, Organizers, Sasi & Anand anna, Komagan sir for this wonderful knowledge sharing trip. 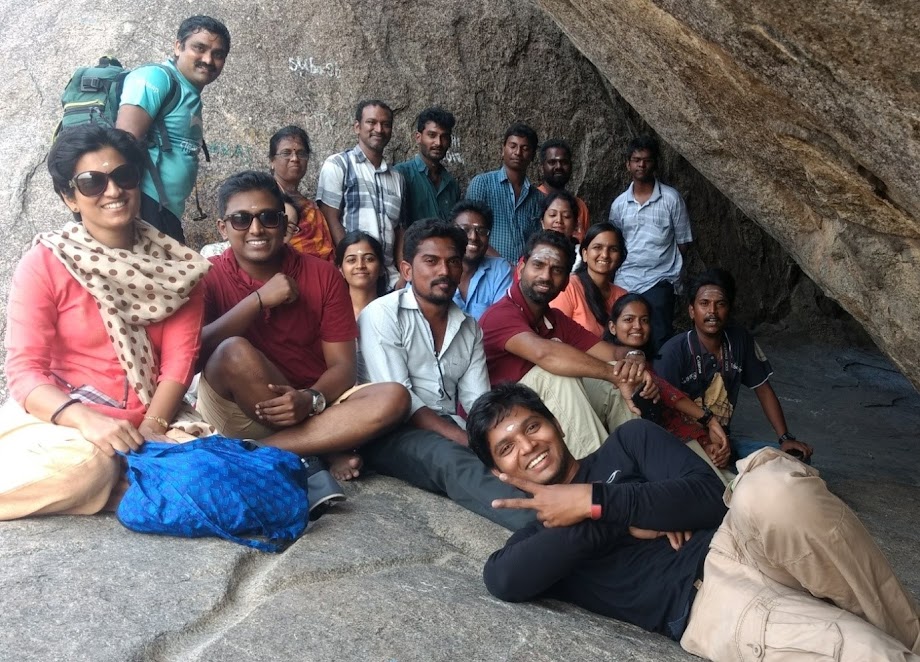