Skip to content
July 21, 2016 Peter Van Geit Leave a comment
It’s all about Pain… survival is just a souvenir!!
Write-up by: Vishal Ramadoss
A sweet torment
Registrations were pouring in after the invite was sent few months ago thinking the trek is going to be like a picnic. The day arrives, almost everyone dropped out few decided after attending Peter’s trek, few out from the fitness tests, few at the last minute. Only 8 members remained strong-willed to participate in this survival mission. A gentle reminder about this so called Marathon in the Mountains V (which is meant only for Men of Steel) is in the past 6 years only 6 marathons had happened and 4 successfully completed within 24 hour timeline, 2 organized by Peter and 2 organized by Prem. Only 31 members out of 24000 member group have completed this mission so far. Marathon in general is a long distance running event that happens on a flat track which is 26.219 miles. This survival mission covers whole Nagala-Tada range covering prominent peaks and plateaus. This mission is for the iron men and women in CTC – maximum pace, minimum luggage, minimum food, minimum water, maximum distance, tough terrain. 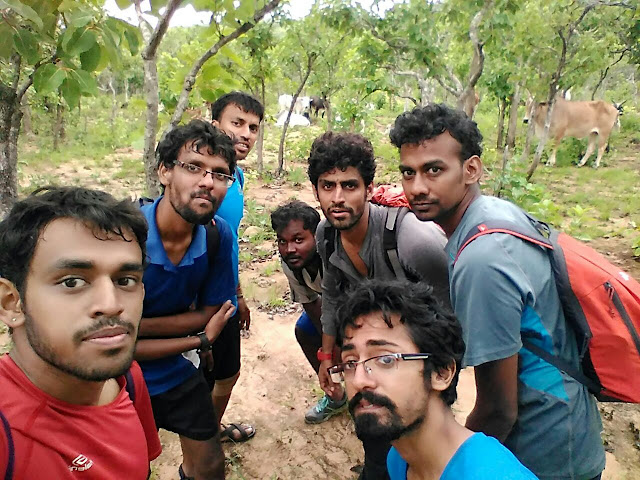 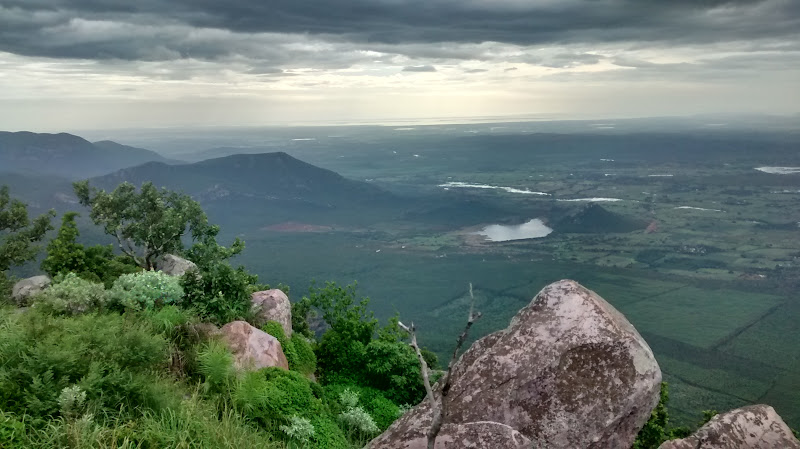 Few will start, fewer will complete. Our plan was to start the trek on Saturday early morning around 3:30 am but we reached the base around 2:30and I asked my team members to sleep for 2 hours as we had to climb the 880m peak first itself which posed a deadly challenge at the start. Few slept, 3 of us were pondering over the stars and the silent water in the west dam imagining what will happen in the next 24 hours. Will we able to survive? Will we able to cross Nagala range itself on time? Just looking at the western Peak we were awestruck at the altitude that we might need to cover. Jack and myself had already completed this marathon once crawling like a baby with ruined knees and twisted ankles. But nothing stopped our steel like spirit and heart to complete a whooping 47 km in 26 hours. I woke up everyone at 4:30 am, Dhvinay and Vijay had gone to pick up water bottles , Jack, Ganesh and myself was awake all the time, Gautham,Karthik and Nilesh were getting ready for the challenge. I was so happy about my team but worried about my injury. I had a hairline crack and ankle ligament injury just 3 weeks ago. But I posted this invite 2 months ago, I can’t just drop out. The team depends on a lead and I always got tremendous support from my team. With exceptional navigational skills from Gautham and Jack, ultra runners like Dhvinay, Vijay and Karthik, Triathletes likes Ganesh,Nilesh and an injured lead with 100 percent motivation, together we achieve more that’s what running in my mind. 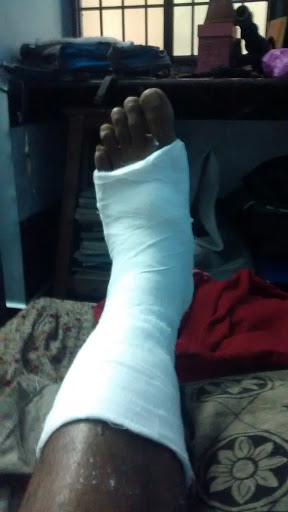 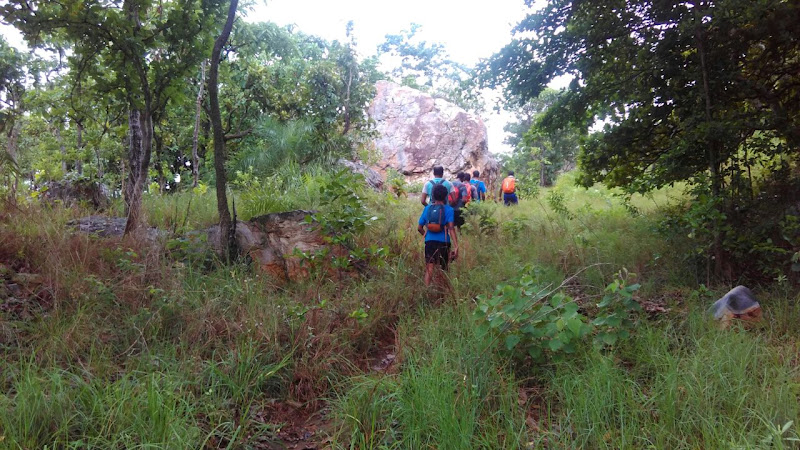 The treacherous climb
We started at 5:00 am sharp from the west entry and started moving fast on the trail towards south peak and the weather was just perfect for the climb. Due to the rainy weather the trail was covered and bushy, we had to find our way through. At one point we missed the trail and the team started discussing about going back. But I strongly disagreed along with a few and started climbing on the steep ridge which is just the right direction towards the south peak. No way we will be going back to find trails, we will be creating our own if needed. So we climbed, kept on climbing until we reach 700m altitude which was a flat surface where we saw a mighty peak but behind that one was the mightiest peak in the whole Nagala range. The brawny winds and overpowering rains showed our way towards the South Peak. As Peter always says, if you want to learn about water cycle just go to Nagala Peak, you will see the clouds accumulating at the top of South Peak due to Pulicat lake and other lakes nearby. We enjoyed the view at 881m, had a snicker and started moving back quickly to the water point. We almost wasted 45 min deciding about the trail, climb and going back but I decided to make people run in the trails after a while. Jack started leading towards west direction quickly with the team marching with amazing speed. We had a moving average of 3.7km/h and I was quite happy with it. We did interval runs until my leg gave up as I was wearing my ankle braces. Dhvinay was sweeping and helping me with Glucovita tablets, Ganesh with Fast& Up Gels. What was left in me was my mental strength. I asked Dhvinay and Vijay to move forward after sometime. Karthik was exceptional as well. Nilesh and myself kept on marching. Gautham started running and then the whole team realized till now he has been walking at our running pace, we could not cope up with him still we didn’t stop. Did we have any choice in the middle of the range? 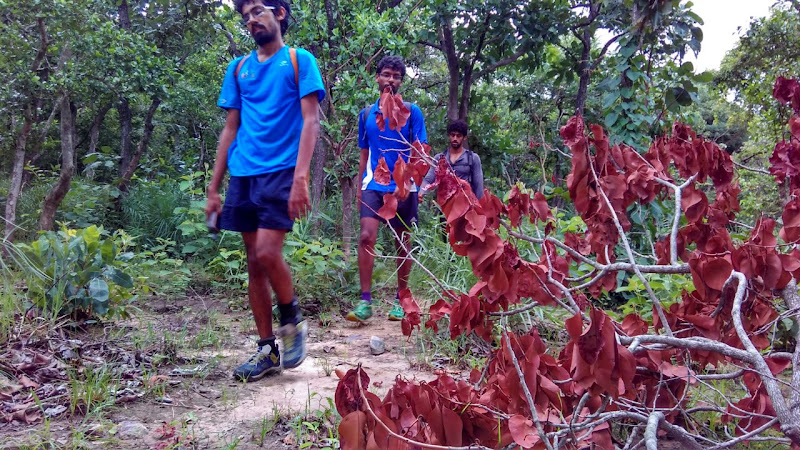 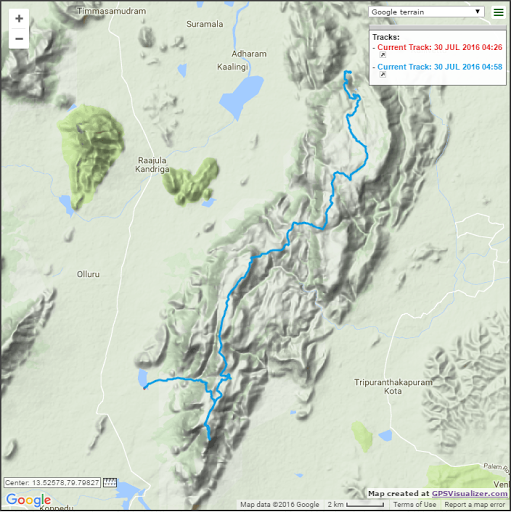 Why are we doing this? 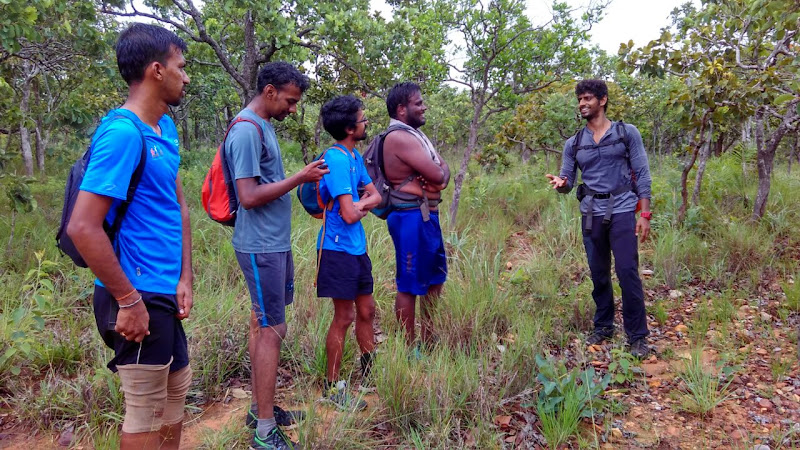 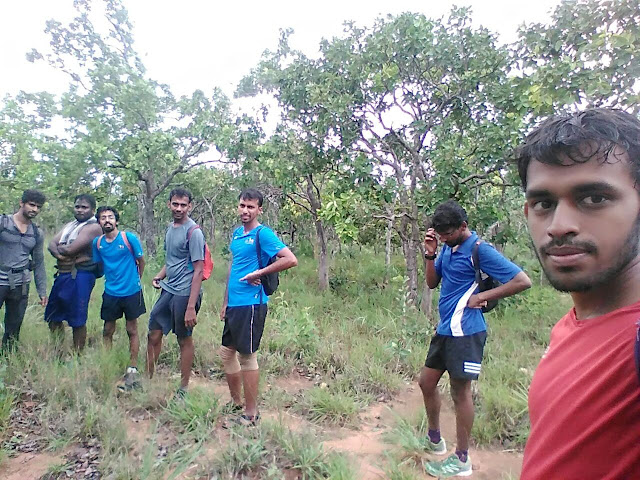 Till now people would be pondering about this craziness, why are people doing this covering the whole range? Why are people doing a marathon in the mountains while they can just do a short trek with frequent dips in the pools or do a flat run? It was the very same question that came into my mind 6 years ago when I did my first trek in CTC which was a life-changing experience due to the emotional, physical and mental challenges experienced on the trip. It is still an unforgettable day in my life and for others who encountered the same as well. To see what you will be like in 6 year timeline, do you often get to share such memories? That high-altitude breeze and drizzles will stay in the heart forever. These treks can be tough, may bring out the worst in you or your companions but at the end you would have known how to react each other’s mood swings and get an amazing bond that will be cherished perpetually. Once the physical challenge starts to be unbearable, your mind starts wondering what the heck you were doing here, regretting you had ever started. Accept the pain and survival as a reward. It will surely remind you that you can handle a paramount problem by breaking down into smaller problems and tackling those one by one. 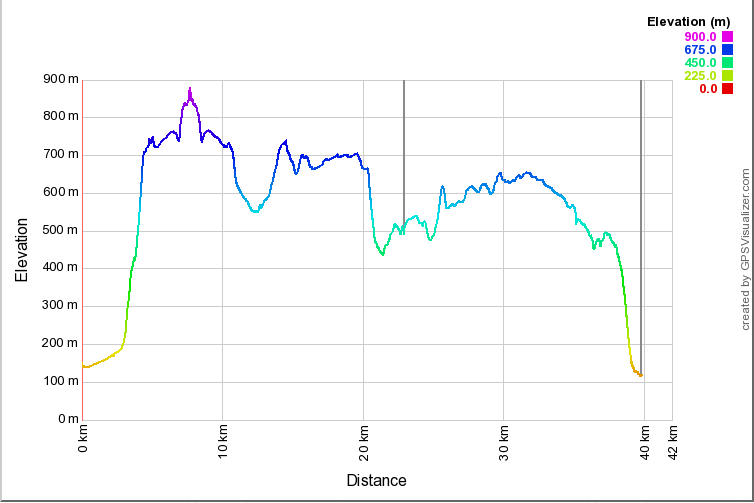 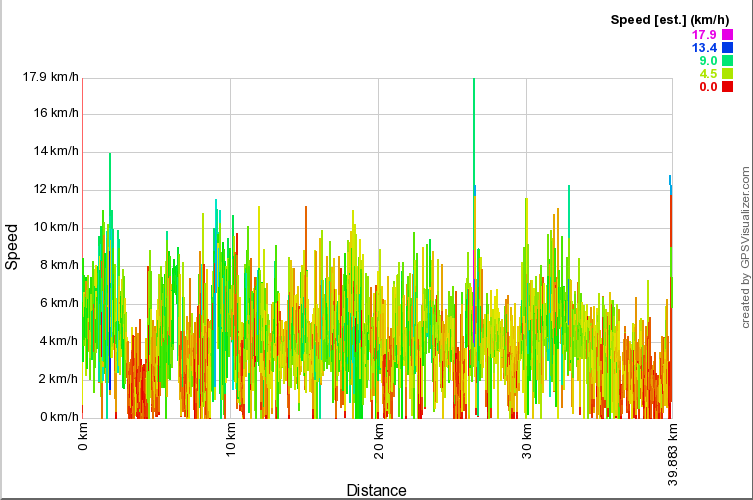 An endurance test
After the water point, we kept on walking and spotted lot of cows grazing at the top until when we realized two dogs from Nagala west had been following us behind and joined our army. We had to reach the east top before noon, which was our target. Everyone was out of water and east top is the only place where water is present. We were navigating successfully past bushes, thorns and fully grown grasses. A steep descend arrived until when we realized the next climb will be dreadful. Jack and myself were moving ahead to the water point while the team was coming behind at a slower rate. Along with Karthik we were skidding through the dry leaves and landed the small stream. Instantly two dogs started hydrating, that showed the intensity of this trek. Soon the team arrived, we had a litre of water, Tang, Snickers. Soon Gautham moved swiftly towards the trail that goes to Magic pool, but then we decided we will take a left and go to the North west and climb to the Tada plateau which was a protracted walk. I was feeling the ligament being stretched, was undergoing a terrible pain in the ankle while Dhvinay was providing me Glucovita tablets every 15 min. We didn’t stop, we kept on climbing till we reached the end of the range to reach the Tada plateau. The 21 km mark in GPS within 7 hoursgave us tremendous confidence, keeping in mind the jeep tracks at Tada would be for running.
Exhausted, drained and hurt 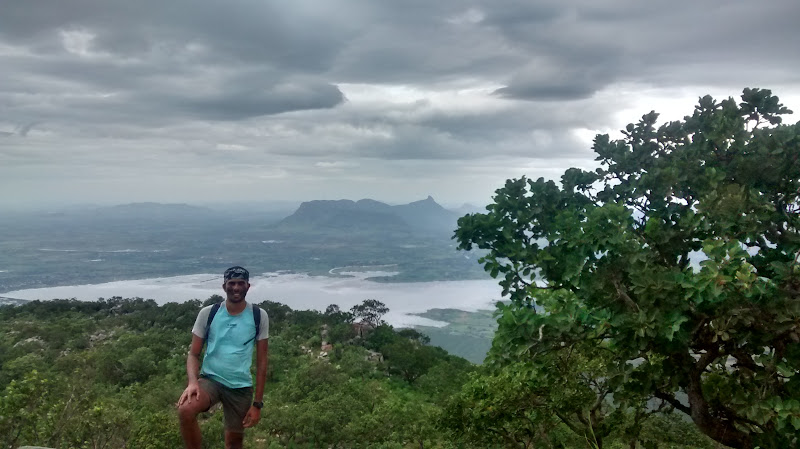 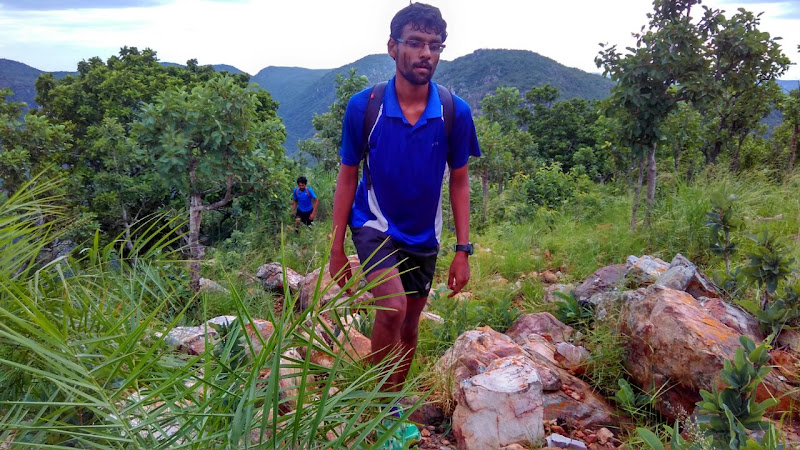 We reached the Tada plateau and I was reminded of Prem’s record of 48.19 km 15hr 37 min. Our target was 14 hours but I knew it will be very difficult as the light was fading slowly and it would be difficult to run like I thought. We didn’t have a single drop of water for past 4 hours and everyone was in need of water. I was amazed by Dhvinay, Gautham and Vijay as they showed no sign of fatigue especially Dhvinay was laughing and smiling throughout the trek. We crossed the 32 km mark and we had few more kms left (now the distance number felt less to us as we are at the verge of completion) but we were not overconfident also. Jack soon informed us everyone is in great need of water without which they can’t move a step. We were just walking on ridge although the view of valleys reminded us the power of water and rejuvenation. Soon Gautham descended to the stream and the team got refreshed with Tang and water. 15 minutes wasted, but team was with full energy and the whole range looked gloomy. The team went through the side stream instead of going on to the ridge and 30 minutes wasted. We did a roundabout and went back to the trail that we wanted to exit, once we found the pile of stones we were confident we could exit quickly. But then the trail was bushy and full of thorns, it will be very difficult to descend. We didn’t have any choice, we started descending enduring the pain and we reached the bottom. We couldn’t surpass the existing record, The GPS battery drained and I sat near the temple pondering how would have been that trek? Our target was 12 hours, what could’ve possibly gone wrong? The trails, night navigation, water points, my injury…. The first four marathons were completed in 26, 24, 15:37 and 20 hours respectively. The ten member team including two dogs from Nagala completed in 16 hours, everyone was happy and we stayed at the Tada stream as we couldn’t exit at the night. We had to walk 20 more kilometers to exit, that’s when the civilization starts. Another half marathon begins with the men of steel
. 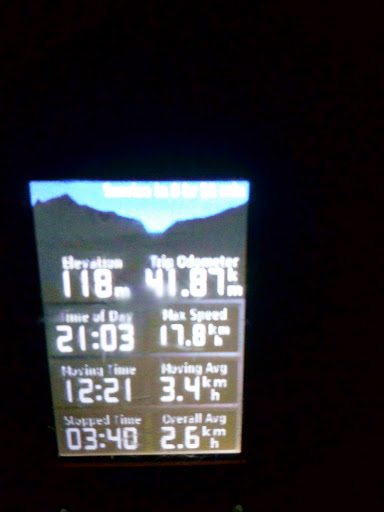 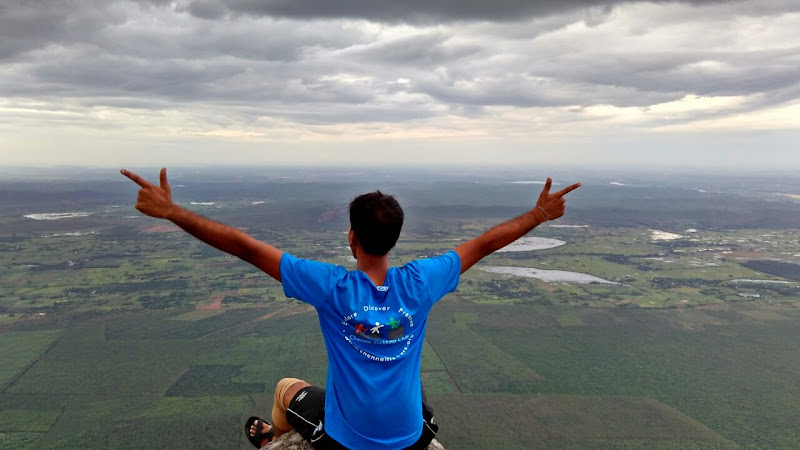