Skip to content
December 5, 2014 Peter Van Geit Leave a comment
[Written by Sundhari]
KIDS!!!!!!!!! The first thought that comes to our minds are little feet running around,screams of laughter,Jumping and a lot of fun stuff.Unfortunately due to our so called globalization, industrialization what do we see?Kids behind shut doors.Quietly staring at computer games,Television and media.I-pad,I-pod ,I-tab has all made the kids to think that life is about “I”.Only me in solitude.No company,no friends ,no laughter and most importantly far far away from what god  gave us as nature.
When I think back of my childhood,I don’t remember a single day that I came home without a bruise,tears  due to a fight..all part of the game.Expanse of lands and trees to play around. Thats changed so much.So what does CTC decide to do?
Give the Kids and their equally unfortunate parents a day to get back this experience!That was the idea of the family camping.Get the families close to nature-Whatever is left of it before someone decides to make do of that too. 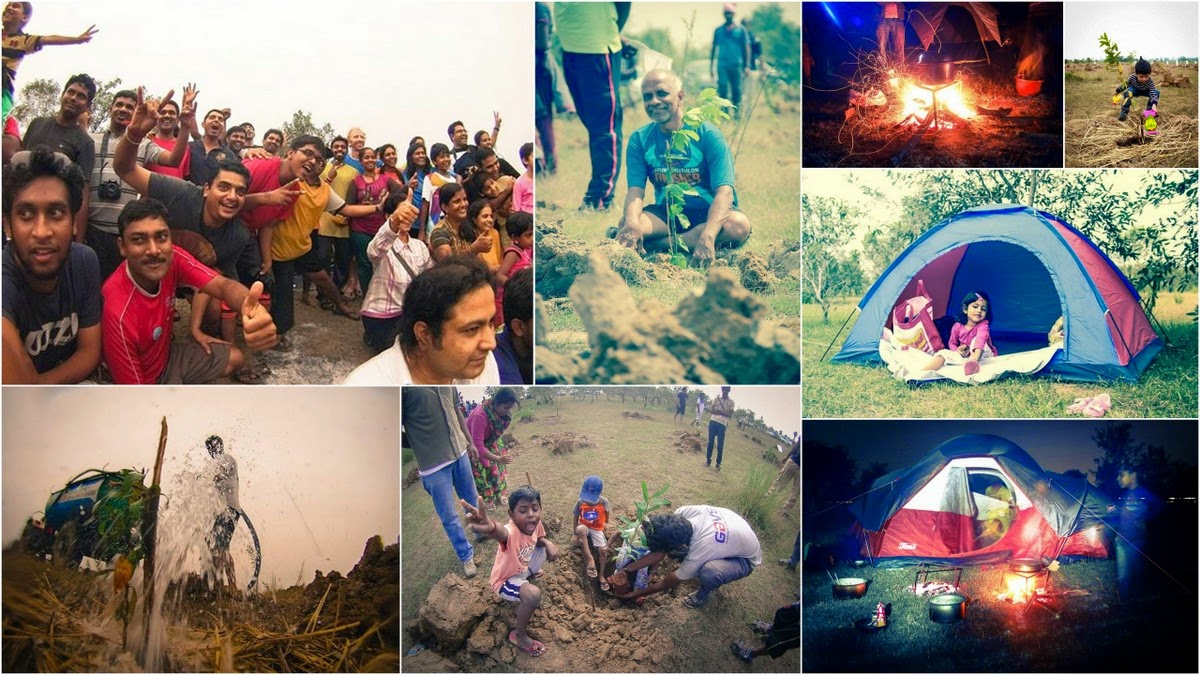 Get the families a feel of outdoors,fun need not come with a very high cost. That’s the CTC deal!
Saturday afternoon Peter and a few of us left to Walajabad ,Our own forest where we had planted saplings a week back.We had to reach before the 20+ families to set up tents and start the works. Reached there and started setting up the tents. It was really nice the way the place started  to look.Better and more warmer   than those high rise buildings we are used to. Cars started coming in one by one.Families were trying to get accustomed to the environment,the fresh air,the change!A  few had got their own tents ,few settled in tents we had got and a few more in makeshift tents put together by our ever so resourceful team.Everyone was settling down-you could see the relaxation on everyone’s face.Far from city,work,troubles.Bliss!!!
We decided to start cooking.Wait!!Where are the vegetables?With rady who was stuck trying to find campsite.Trouble 1-Kids will start to get hungry.Plan B-Slice pineapples and give them.All temporarily happy.As soon as Rady and remaining families were in cooking started with full force.The world was our kitchen.Wood was set-up ,vessels on and here we go.
Pasta,soup was the first to be churned out.Games were played to keep the kids happy.Thanks to Bhagath who kept them totally occupied.They ate the soup and pasta and each one started snoozing tired after the workouts and running around.Mega AC switched on from the clouds!Next came the yummy  & best chicken I have every eaten by our Rady.Accompanied by vegetable biriyani .The elders feasted and could not get enough of the food.Parathas were also brought in.For a moment we were thinking there is too much of food,but finally left with a very little bit of rice.Photos were shot by our passionate photographers with all the different light angles to capture each and every member present at site.Memories are very important.Thats the only one that stays with you forever I say. 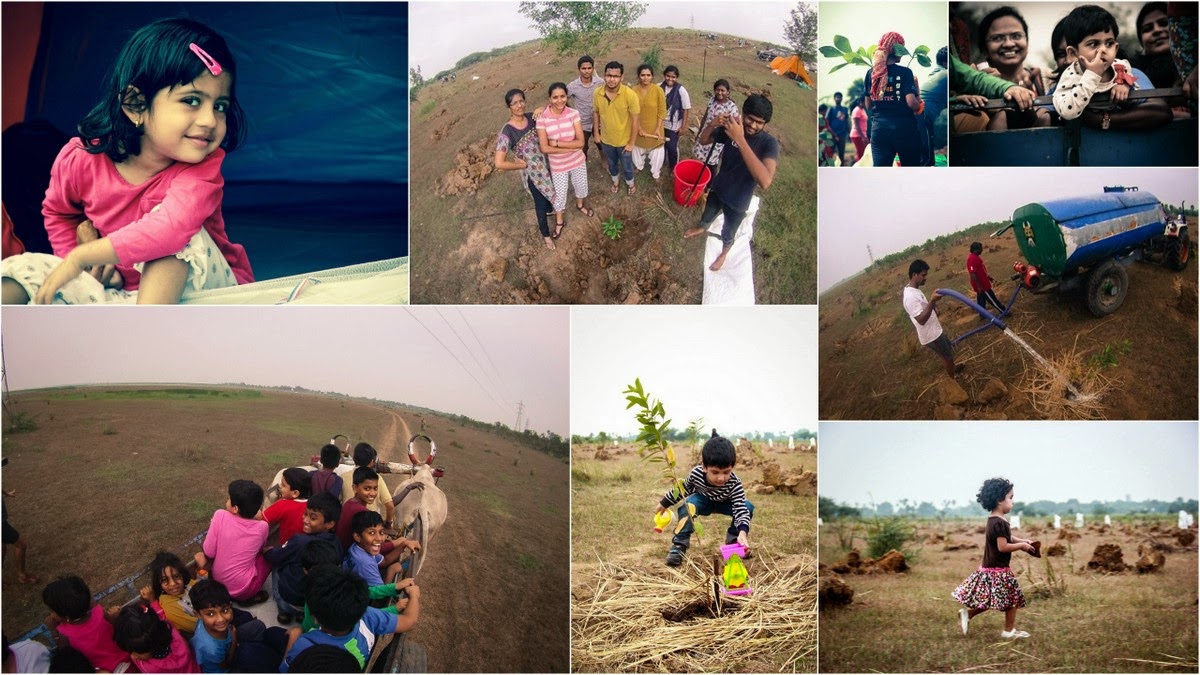 We finally dozed away  right under the dark sky-Thanked the rain god for staying away this night.Cool breeze flowing through and filling our lungs with fresh air.What an experience!Must have been 5 minutes and could hear Rady’s call for Tea.Woke up to a bright day ,must have been around 5:30 .Some were up,some still snoozing,no one carried alarms for a change!!
Slowly people started coming out of tents like pupae out of their skin.Tea was prepared and everyone was sent off for a walk by the lake till we got the breakfast going of  toast and cereal.The kids freaked out at the lake and were just digesting the fun when a bullock cart with chaffeaur was ready to take them for a ride.More screams and cries and  fights as the kids did not want to get down and the parents wanted to go for a ride!!!
In parallel the team also watered the saplings ,almost a competition set  in on who will water more saplings. A water tractor was also brought in to water the saplings.Kids(and us!) jumped on it for rides.
A few of us went along the tractor into the city to re-fuel water while others stayed back to yummy payasam and a few more games.
I had four little people with me alongwith Sulai and Rady.Except for Rady’s daughter the other three had not even informed  their parents that they were coming in the tractor!!We finally got that dreaded call asking for the kids.We re-assured all well and made most of of the time we had.
We already knew this was a success with the amount of fun all of us had.But I have to mention this instance which was a true testimony of the efforts.
The 7 of us were dropped off  Geo-city –a new apartment project,while the tanker went to get water filled in.To make good of time we wandered around the new houses with the sales guy explaining the architecture of the building.While coming out I asked Jishnu(one of the little fellow)-“These houses look so posh and nice right”?.He just looked at me and said “No.I like the tents we stayed in last night!!” 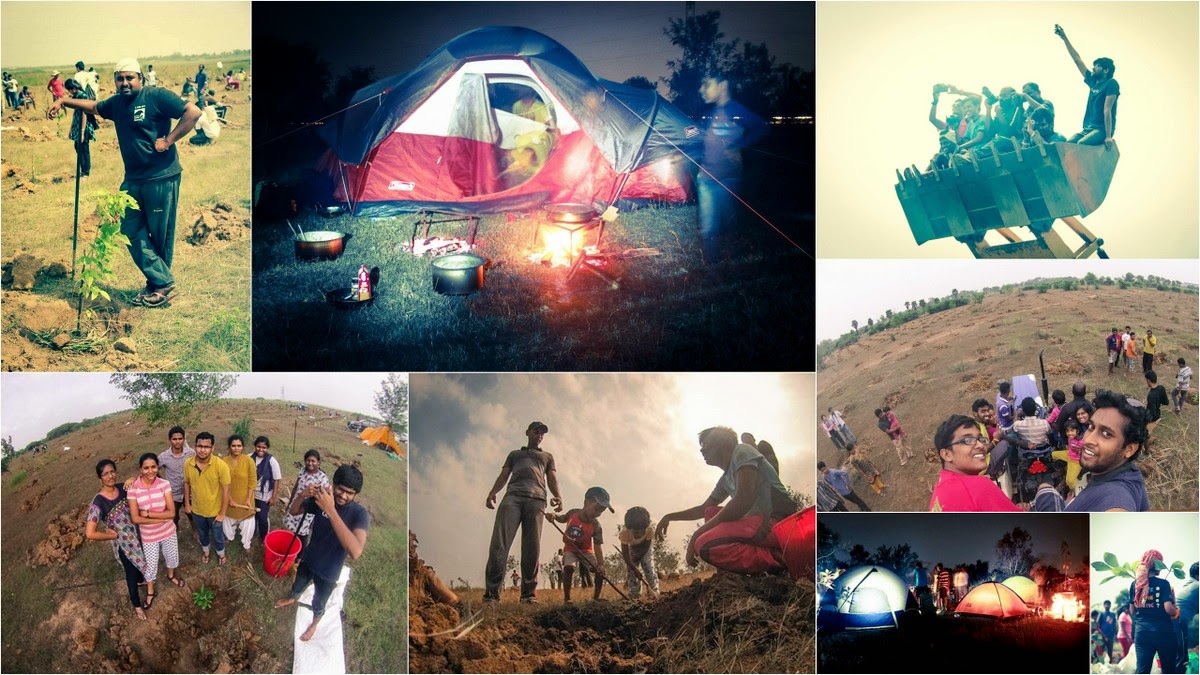 We arrived back at site thoroughly enjoying the ride back with these smart kids just in time for some rain and payasam.Families started dispersing with almost the entire Sunday to themselves.
After everyone left Peter and a few of us again started packing with help of course from a few.Took a power nap under the tents and very unwillingly got into the car to head back into the mechanical city life again!!
Lots of memories,first time experience and kudos to Peter for organizing something so fantastic  and the families who so relentlessly volunteered to help in everything ,which brought in smiles from a many!!
Goodbye till we meet again in another fun filled family Camping with a bit more refinement with the learning!!