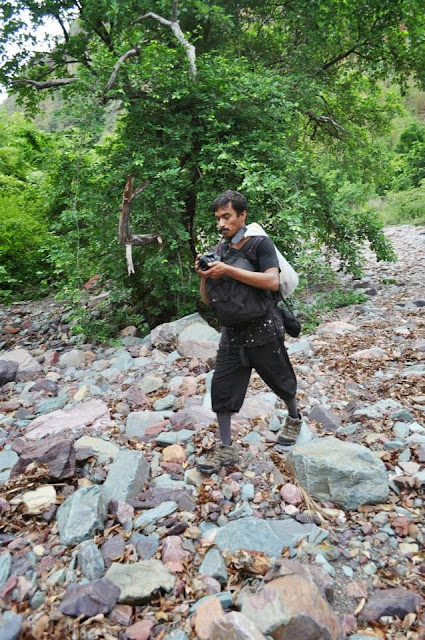 Then stumbling upon whom to carry away along with is a real question provoked within us…. So, Prem Decided and phrased saying, “Eva Vandalu Kotikittu povo, Empleror Stylea EXPRESS TREK…”(Whoever comes, we ll lead this Express Trek in Emperor’s fashion…). So the invitation thrown in CTC page….

There were few BRAVE souls who signed for this trip despite of knowing the TITLE and selecting criteria was based on trek frequency by individual…. After looking on few interested people, Prem took few New people as well comprising mixture of Newbiee’s & Tough nuts. That’s how we got groomed, so day arrived 4r preparation with loading things…. 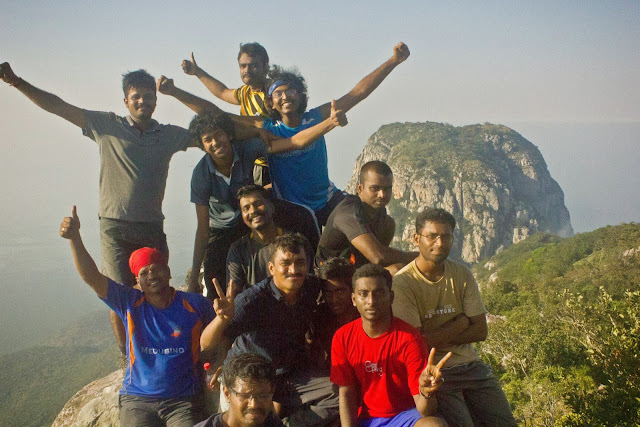 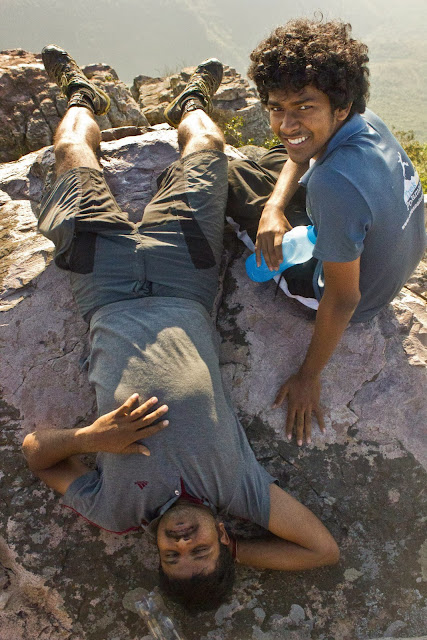 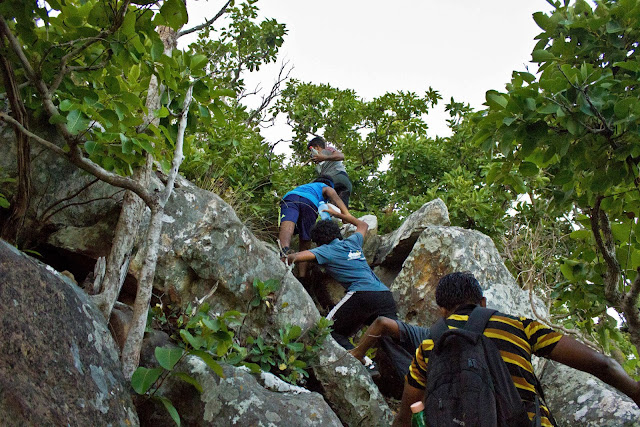 After settling down, hassling up things to be carried among us made easy job…. Few Newbiee’s Made slow beginning made us to take a small dip 4r rest to witness Beautiful Sunrise… Prem was pushing us not to hold initially, so he asked wrap up the Speed which aint happening with few people…. We pulled hard to climb up to reach to southern water point…. While Moving fast, I got stuck 4r loosing something on rested point…. Checking Carefully, WAT??? BRITELITE TORCH!!!! 2000 bucks MANN!!! Left my bag down & ran down like Hell, Collected the same & caught team in Same speed…. Prem was @ high tone 2 push Fast…. Long March took us to Water point @ Southern point, Picking up energizers & refreshing Prem insisting few Slow Pacers 2 take rest holding all our Bags….

Marching Fast ahead, running parallel among bushes & thorns made good pass on to Everyone for keepup average speed  towards destination…. U wanna know how fast we ran??? We Were running atmost speed without even NOTICING my LENS COVER flipped away!!!! Oh Gosh, terrible Stuff it was during such rush. Few instances later, we climbed our 1st peak in designated time interval, we took small rest, Refreshment, Photographs, fun & Discussion…

So next we need to reach the water point & proceed west side of Nagala, So do we flown away in air keeping timing at control. I didn’t expect we could downstream people, we reached our water point later and Prem Conveyed that we may push hard Further to catchup 4r quick coverage. Mid-Way our Fellow Trekker got Cramps which was Unexpected…. Treating them & picking up, We took our stuffs & marched towards Westside of Nagala…. 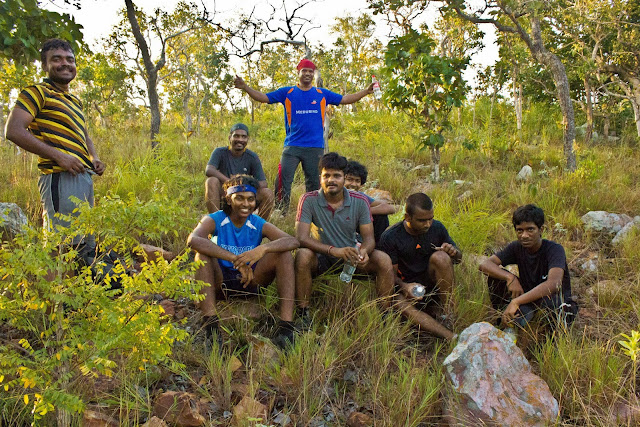 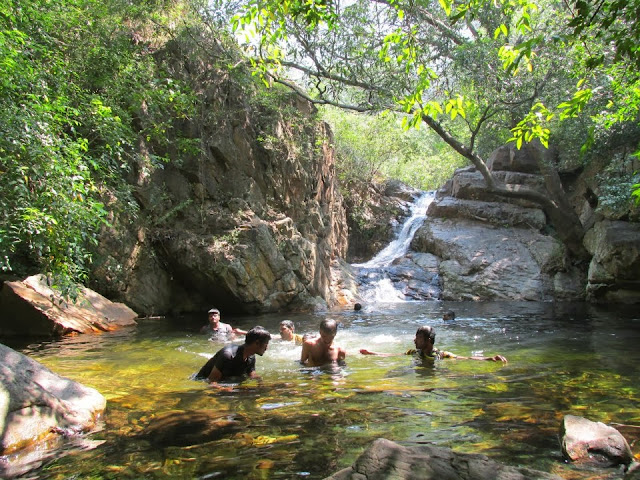 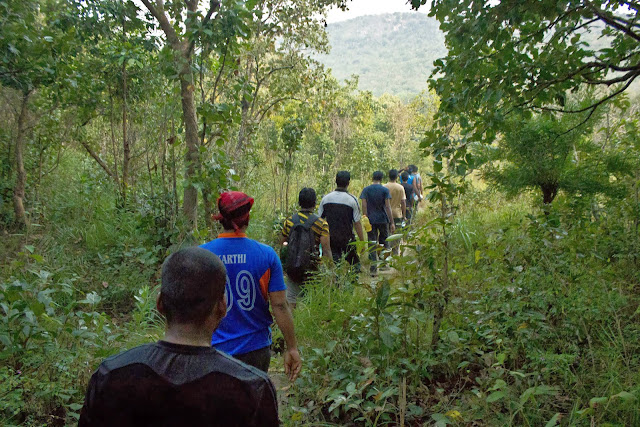 Enjoying the path & Rushing up, we reached the spot with few hiccups and Prem insisted 4r people to pickup speed which made few people to stay behind 4r Discontinue their trip with us….. After Hugs & Handshakes, we rushed in left behind people towards our western peak… After Having Sweet Swim @ 2nd Pool, we pushed very fast towards our goal. We witnessed COUPLE TREKKERS Near 3rd pool & Prem saying,”Dei Edathavadu Sapida Usarpanughada… COUPLE’S TREK VERAA”(Try to steal their food), After seeing new faces we backed off & Proceeded towards peak…

While Crossing Mini-Courtellam, Our Patrick got Stuck & Wished not 2 continue further…  So, we had hard leftover & conveyed our wishes to him. We pulled up 4r destination, on trail we witnessed our Gr8 SHUMON & SUCHI…. They were so adorable helping everyone around & claiming us like TERROR GUYS… Prem was like THNX 4r de Compliments Guys & rushed further towards Western Peak. All of Sudden, we saw Arun Prabhkar taking good Nap at 4.5 Pool. Closing Silently towards him, we had good chat with him & stole his food too…. Fierce comment 4rm Arun saying, “Dei Thirutu pasangala….”(Thiefs)

Without Further delay, we rushed with our left behind Souls proceeded towards peak. On the way, Myself got bit tired & I took small rest by taking good air meanwhile Prem, Sollin, IIT’s, Ponnu & Magesh crew went peak leaving me behind. So, I waited 4r their return. I couldn’t hold 4r longtym waiting thought people would have slept out there @ peak. I planned 2 reach down to 4.5 pool, While climbing down un-noticeably I flipped from the rock and fell down 4rm the top of the west Peak towards the stream…. I Didn’t Expect a Hollywood Stunt effect 4r me!!!! Ma bad, ROLLING Down, ROLLING DOWN!!!! Was like HELL….. I was mesmerized with DOWNHILL FALL!!!!

Last thing I remembered was, I was stuck in a tree just close to deep fall near Stream…. I was like LOOKING UP & Saying, “GOD’S GREAT”. Managing myself towards getting up & scrambling towards our meet point looking 4r people….. I Saw people after few distance of walking gave me a Self-Belief that I could do better. After narrating story, Laughter, Refreshment & Small Nap we decided 2 proceed further towards central Peak…. I wasn’t that bad walking, But I was crawling towards middle between the crew…. After covering distance, we reached a spot where Prem decided to take us 4r Central Peak….. We climbed towards Peak & Accomplished distance in sooner Time Lapse…..

All Set 4r Final Course of Reaching down to base, downhill wasn’t that tough…. Pulling things together we reached at Villagers Resting place close 2 Base…. I was segregating my Complete Threshold to get down with my own potential & I made it despite of obstacles reaching base…. Prem was happie with our Team & TIMINGS we concluded…. Hurray guys!!! We Re-Written the History of 44 km in 14 hrs…. We should Thank PREM, Nithin, Vara, Ponnuraj, Magesh, Sollin, Siva, Patrick, Akilan, Manoj, Vicky, Yuvi & Senthil. 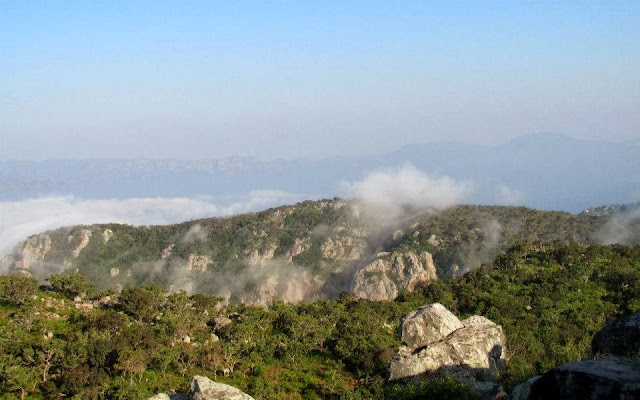 Switching our phones 4r celebrations with friends, Prem was awaited with BAD NEWS abt Peter’s TREK Mishap!!!! After come 2 know the situation, I was worried abt Injured NOBAL(One of our Best person in CTC) & Other People stung by Bee’s. Prem made few calls & Contacted ERT for further Prep,  we went to village with Vehicle fetching Food 4r People. There comes our Gr8 Sankarji to carry forward things towards Incident place. Prem insisted us to Stay behind with Car, Prem declined Nithin request to join Prem 4r Visit injured people inside forest. They got only Co-ordinates abt their location, wrapping few things journey of two people scheduled AFTER EXPRESS TREK(Dedication Towards People Well-Being)…. They were Climbing towards North west part of Nagala, All of sudden sankarji Spotted MOVING OBJECTS beneath the dry Stream…. After having better LOOK, Sankarji & Prem had a better glance on TWO BEARs approaching them…. /?’!1@#4$*%…. Holyyy God Screamed both, Slashing towards opposite directions they ran outta way leaving MOTHER BEAR & its YOUNG to pass away.

Once things were settling down, myself decided to move towards Chennai 4r Next day work….. It was wonderful Day RUSH overall…. Stamina is all about to be tested yet…..