Skip to content
May 30, 2012 Peter Van Geit Leave a comment
I’m back again but with a different write-up.  The last was a trek and this one is about cycling………….
Sounds interesting right; well, let me come to the point.
After a hectic computer class in the afternoon of 19th May, I came home like a torn rag and sat on the couch. I was reminded by my brain to pack up all required things for the cycling expedition. I ignored all that and switched on the AC in the bedroom and relaxed. Soon I discovered the time 3:30 p.m and my dad’s departure from office. I got up and started hurrying here there, not knowing what to take and put inside!
After dad came, we had to hurry, picking up everything and arranging them. The reporting time for us was 5 ‘o clock at Koyambedu. Fully prepared, my dad and I left at about 4:15 p.m. My dad rode on his Cannondale BadBoy and me on my X-Sport (don’t worry, it’s Indian-made). The ride to Koyambedu was little hectic, squeezing between vehicles and heavy traffic. 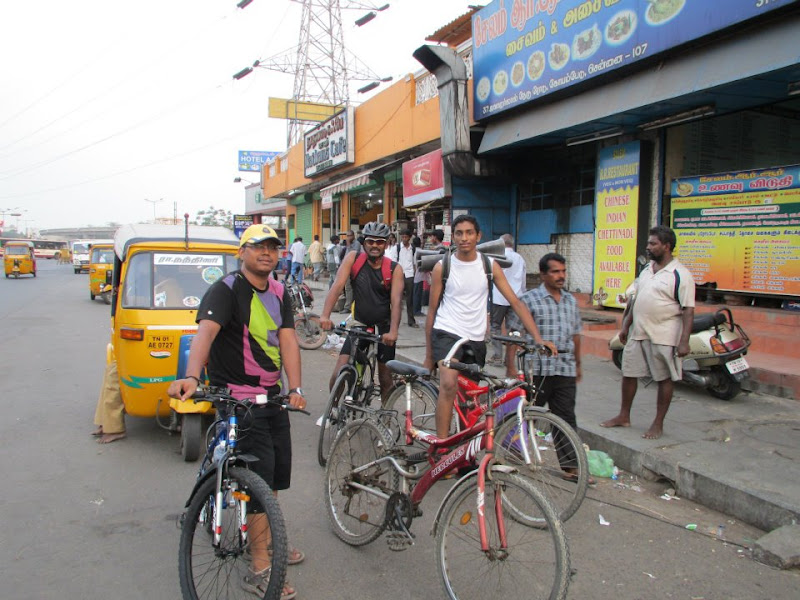 We reached at 5 ’o clock, only to find out no one had come. We waited there for long and finally Arun anna from Thiruvanmiyur (hmm……. that’s far) arrived. After introductions and other stuff, we underwent another round of waiting. Soon, Balaji anna arrived with a brand-new bicycle.
The four of us started to Anna Nagar Bus Depot at a medium pace and reached in no time. We met Vijay anna and Aparna akka at the bus depot. Red Hills was our next destination. We had to meet Tilak on the way. After meeting and continuing our journey with Tilak anna, the route was smooth on the Nellore highway.
I never knew riding cycles for an hour or so eats away your legs (great discovery….). I had to stop here and there for a water-break. I discovered the others waiting at a spot and turned towards them and took a rest. I cleared the brain by listening to my iPod (Chennai 600028 songs, yeah!) and it punched me with positive energy. We waited for at least half an hour. I called my mom and brother from my phone. After knowing where Balaji anna and Tilak anna were, we started going further North on the highway. 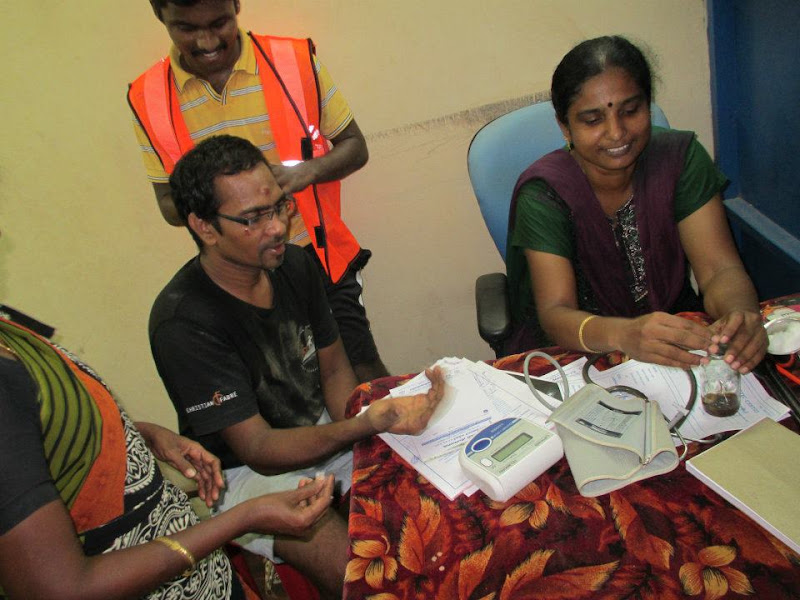 I was surprised to find that Thilak anna had got hurt. It had happened when he was riding on a stretch of road which had a foot deep dirt path on the side. A motorcyclist who came too near him made him slip and fall onto the dirt path. So, they made Thilak anna rest in a hut. Some kids from the hamlet were talking with us and posing for photographs.
A decision was made to call a doctor on the other side of the highway.  After reaching there, the doctor was bandaging Tilak anna’s wounds. My dad took the photograph of the doctor and the clinic. I left my cycle at the clinic and took Tilak anna’s as he could not ride the bicycle. Now I was riding Tilak anna’s Ryders (gear cycle). It made my journey easier.
Tilak anna came on Aparna akka’s Honda Dio. We had our dinner at a dhaba near the highway. From there the journey became smooth. I could maintain a steady speed.
We approached the state highway towards Satyavedu. There were no streetlamps; we had to use our torches. The road was dark and lonely, only a truck or car passing occasionally. We had to cycle in a line to overcome the opposite wind. As I was passing through a village, lines of dogs were barking at us as we passed. After 14 kilometres, a lane going towards some village appeared. We took that lane and reached the village at 00:45 a.m. 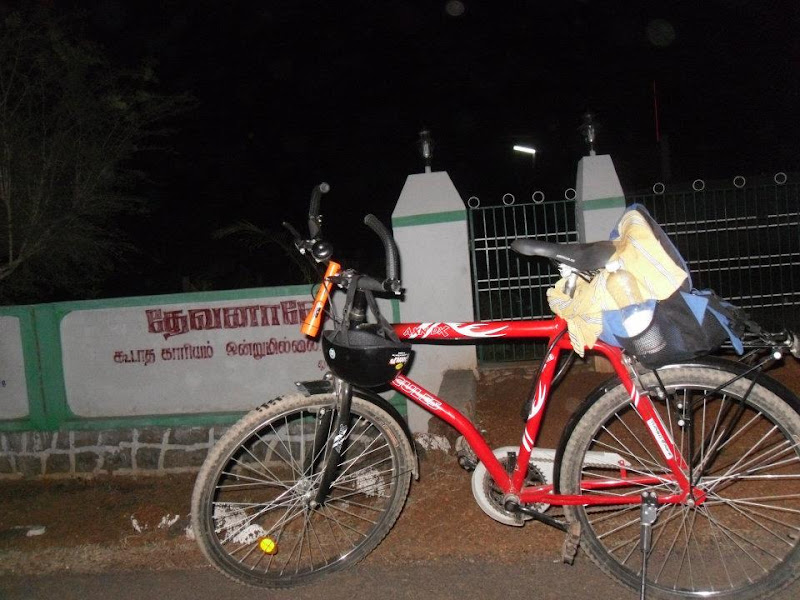 There was a church with a garden and a small ground. We slept in the church ground. I couldn’t get much sleep. We had to get up at 5:30 in the morning. After getting up at 5 a.m., I freshened my mouth by gurgling some Pepsi. From there we went to a home whose Tilak anna knew. The people there were very affectionate to him. It looked like he did a great help to them. We drank coconut water and continued to the village well. The well was deep so only a few could bath. Some of us did not bath. We packed up, posed for photos and left the village.
The return was more tiring than before. It took longer to reach the highway. We ate at a mess in the highway. As the sun grew hotter, the journey became more longer. I had to stop more times. My dad, Vijay anna and I stopped at a shop and ate a banana and drank some juice. Then we continued to go to the village where I kept my cycle. Actually, Tilak anna took it and rode it from there. I kept going and found everyone eating palm fruit under a tree. I went there, ate some palm fruit and returned Tilak anna’s cycle. I took mine and cycled towards Red Hills. After reaching Red Hills, I drank two glasses of lemon juice, bought water bottles and rode on.
We had to part ways at the Redhills-Ambuttur road junction. My dad, Arun anna and I took the Chennai Bypass to go to Porur. That was the most tiring part of the whole journey. At one point, when my dad asked the time to Arun anna, he remembered that he left his costly watch at a petrol pump about 7km from there. He turned back and left. Then it was only the two of us. We had to stop lot of times and take rest. It was very difficult as the time was 12:20 p.m. Finally, we reached Maduravoyal against all odds. We rode down and took the Alapakkam main road (leading to Porur). We took rests at two points. We stopped near a butcher shop and stood near there and the shopkeeper was talking to us. He was a state cycling champion few decades ago and showed us his certificate. He did a 70 km race in 1hr 30min. At this point we realized that our feat was insignificant. 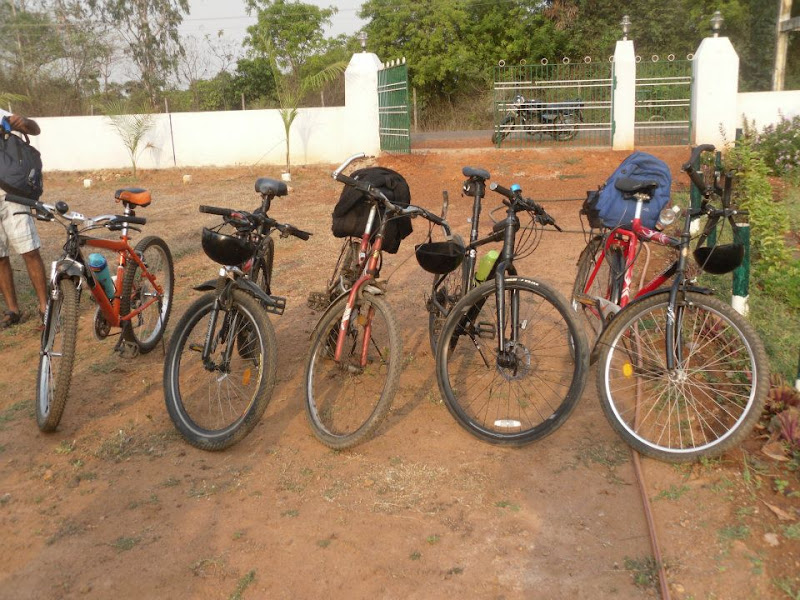 Suddenly, I was aghast to see Arun anna who was 15 km behind us catching up. Kudos to his stamina and willpower. All of us went home, freshened up and had lunch. Arun went his way for completing his remaining 15 km as he had to attend office. My dad and I went to bed and woke up next day morning.
Looking forward to my next trek,
Thanks Tilak anna,
M Skandha Saradhi