Write up by Durai

When the whole world was counting down to welcome the New Year at their home, their cities and other known civilizations. A bunch of 21 CTCians vanished inside their second home the mighty “Venkateswara Reserved Forest” to welcome the year ahead in a style well known to them and marked an historical event for the rest of the world to only read and dream about.
The group consisting of an uneven mix of 20 guys and 1 darling gal coming from Chennai, Bangalore and Hyderabad met in Tirupathi on 31st December early morning and headed to Papavinasam Dam to start their three days trek. 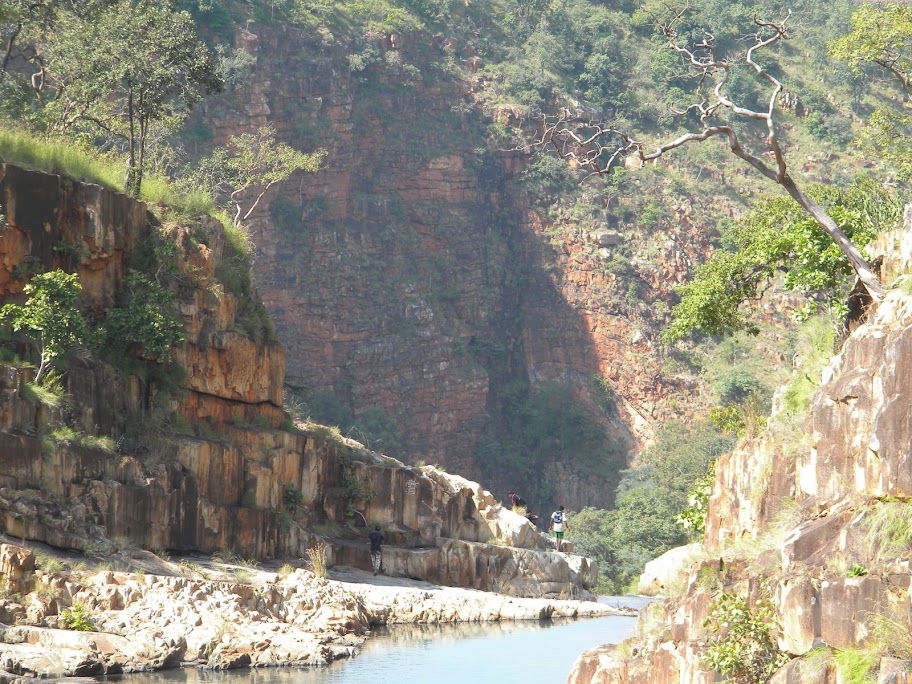 Day 1 – Party with the wild beast
It was this day of the life that the entire group will never ever dare to forget.
Encountering a wild sloth bear face to face is not an easy opportunity which a trekker gets in his life time that too in a short range of 5 feet. It requires the courage of a lion, the strength of a bison and the patience of a tortoise to encounter a wild beast face to face. What followed after the encounter was fear and panic spreading across the group although shunned down by the brave souls in no time.
The New Year celebrations was spear headed by cooking, singing and adventurous team hitting in full swing the campsite and rocking the mountains with their energy and their goodies. The last day of the year was indeed a special day for the entire group to cherish and keep it close to their hearts. 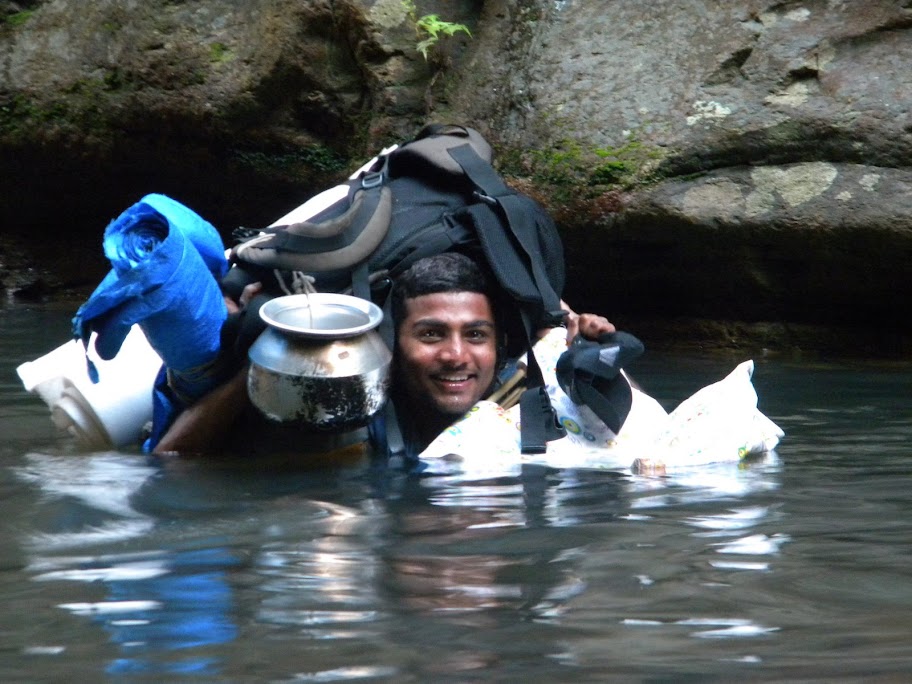 Day 2 – the “NEW YEAR DAY”
Can you imagine taking bathe on a New Year morning in a water fall which is unparallel in its beauty and splendid in its freshness?
One can’t imagine taking his eyes out of the Angel falls for its impeccable beauty and crystal clear water. The swim inside the pool is something I would term it is as “heaven on earth”.
What followed after the fresh bath in the Angel falls was trek, trek and trek cutting across the thick jungles and wild streams. Ferrying across the wild stream was a perfect instance of man’s survival with his sense of togetherness and carrying for each other. 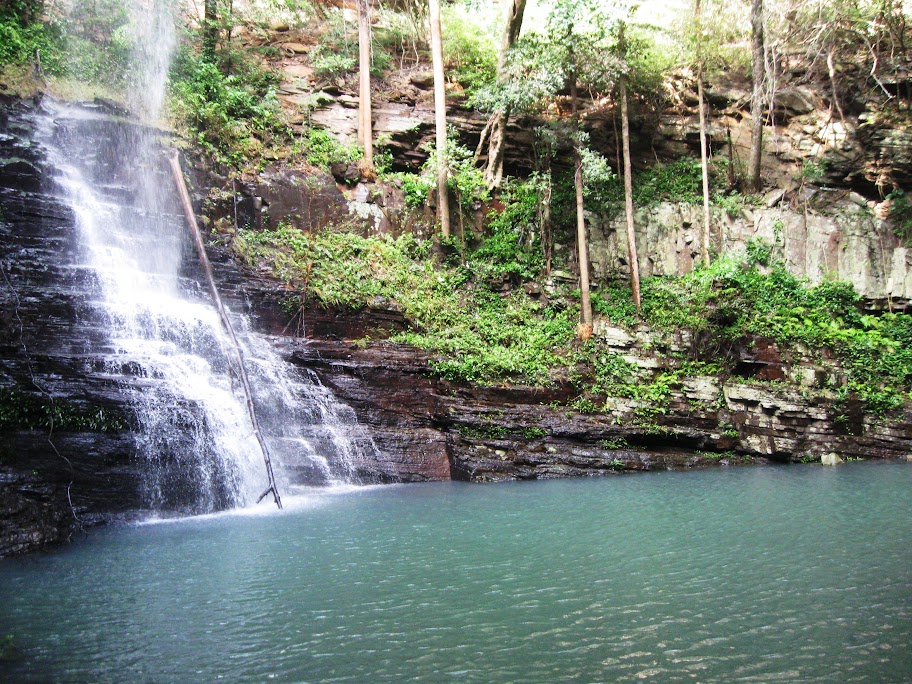 The tiring trek was rewarded by our beautiful V 6 pool were we had our lunch. V 6 pool is a trekker’s delight and a perfect refreshing point for tiring souls. We had some amazing dives and swim in the pool and got completely drenched with its beauty and to confess this is the best place I have had my lunch so far in life.

After another few hours trek inside the thick forest we reached one the most beautiful camp sites in the entire venkateswara forest the “Betel leaf” falls. The tiring souls spent no time to take a dip in the wonderful falls which refreshed the entire soul and body. The night-stay on a no-moon day with twinkling Stars on top of your head was a god sent opportunity to enjoy ‘Mother Nature’. Marvelous, fantastic can be shunned down as under statements. The chill weather refreshed the entire body and gave us a sound sleep. 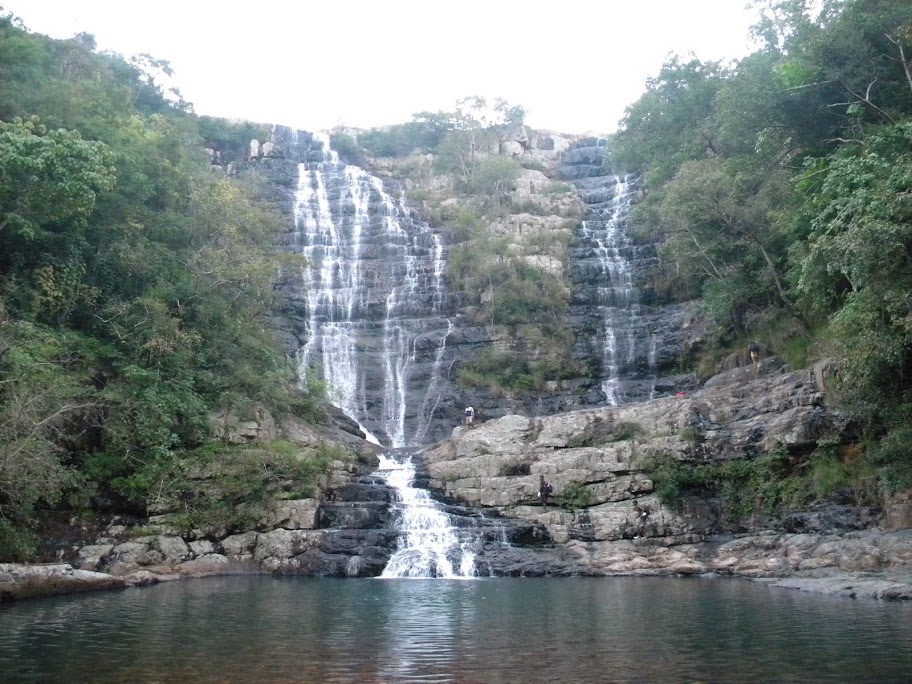 Day 3 – the tiresome day
With heavy deadline of 30 kms trek in mind the final day was a pleasure in pain. We started to trek early morning and crossed through wonderful rock formations and thick jungles.
Even after the sunset we were stranded inside the forest and had solid 12 kms to trek to hit the closet village. All the 21 survivors started moving as a single unit at a steady phase ignoring the rain, the muddy soil and had to trek across the waters of the village dam.
No Food, No Water, No Rest and all that was on our mind was to hit the nearest village and to complete our trek. At 2 ‘o’ clock in the night we hit the nearby village – welcomed by the barking dogs of the village.
After missing our transportation to our respective places came the most remarkable part when we had to board a goods lorry and travel to Chennai. In a perfect CTC style we completed our NEW YEAR TREK and reached Chennai at 6.30 a.m. 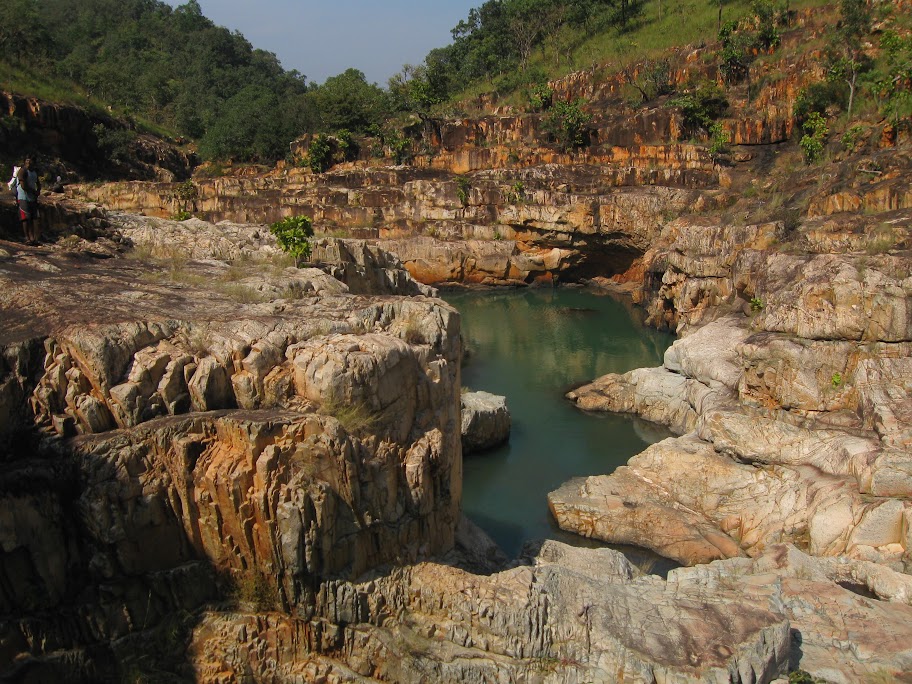 With the core organizers of the New Year trek dropping at the last moment it was one sole brave heart who took this mission under his control and said “come what may, nothing stops a true CTCian”. Indeed it was a one man army, a single man show and the entire credit for this trek goes to our bellowed ‘GOWRI SHANKAR”. Hats off to you GOWRI.

Write up by Ram

Day 0 (Dec 30):
A bunch of us gathered at the CMBT bus terminus in Chennai. Sudarshan Sivasankaran was the first and started the process of gathering us together. The first piece of big news was that the organizer had a personal emergency (grand parent passed away), so he could not join us. Well that was not going to stop us after days of anticipation! Besides other CTC folks stepped in to fill the gap. To add we had a lot many dropouts to reduce our ranks from 35 to 21.

A clever piece of positioning enabled us to cash in on the tickets of the Chennai folks who had not showed up. It was to be an oft repeated theme of rising to the occasion 🙂

We arrived in Tirumala early in the morning (4am). Folks from Hyderabad and Bangalore were at Tirupati. they took a few more hours to meet us in Tirumala. The wait was not over yet, for now the permit had to be obtained from the forest officials and the requisite payment made. 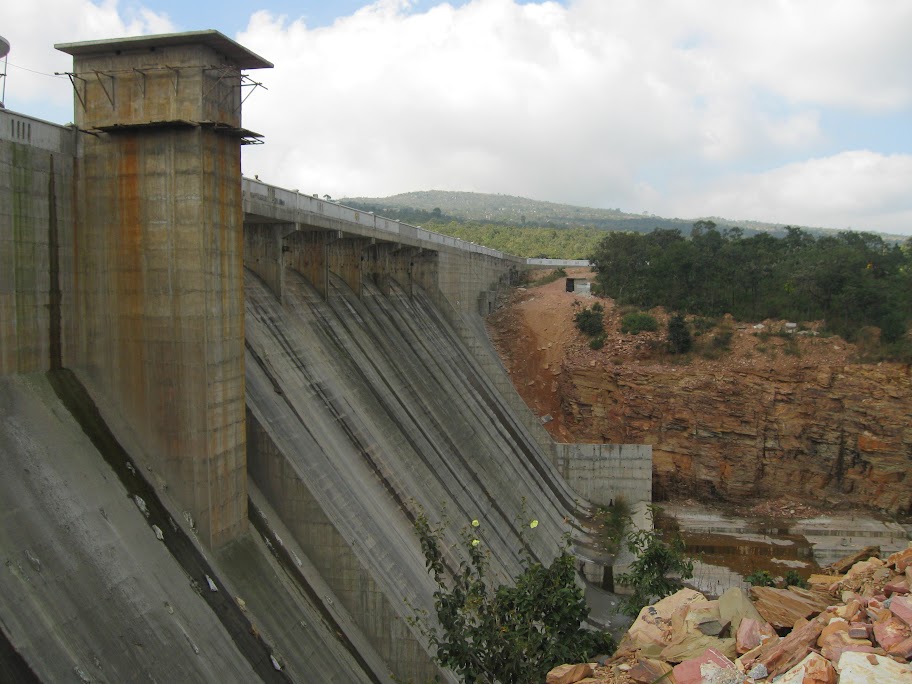 Day 1 (Dec 31):
After sorting through the food (originally sized for 35 people!!!) and sharing the weight, we proceeded to board a bus (to Pavanassam) that would take us to the beginning of the trek. We started by crossing a dam that would take us into the forest. Gowri lead the way with the GPS. There was no map of the area, and we were going to depend solely on the GPS for the entire trip.

We crossed more dams, some under construction and folks even cajoled a vehicle belonging to the construction crew to give a ride (may they wash dirty dishes for the next 6 hikes!). It was slow going for the most part. An ancient jeep trail provided some semblance of

The GPS route was taking us the same way the previous team had followed. There was no gentle way to trek, we were going up and down some rather steep stuff. In one such case when we dropped into a valley, the team in front ran into a sloth bear that was resting in its hole in the ground. Us folks up above heard deadly sounding growls from the valley below. The bear was within a few feet of three of the trekkers, got scared and ran off! 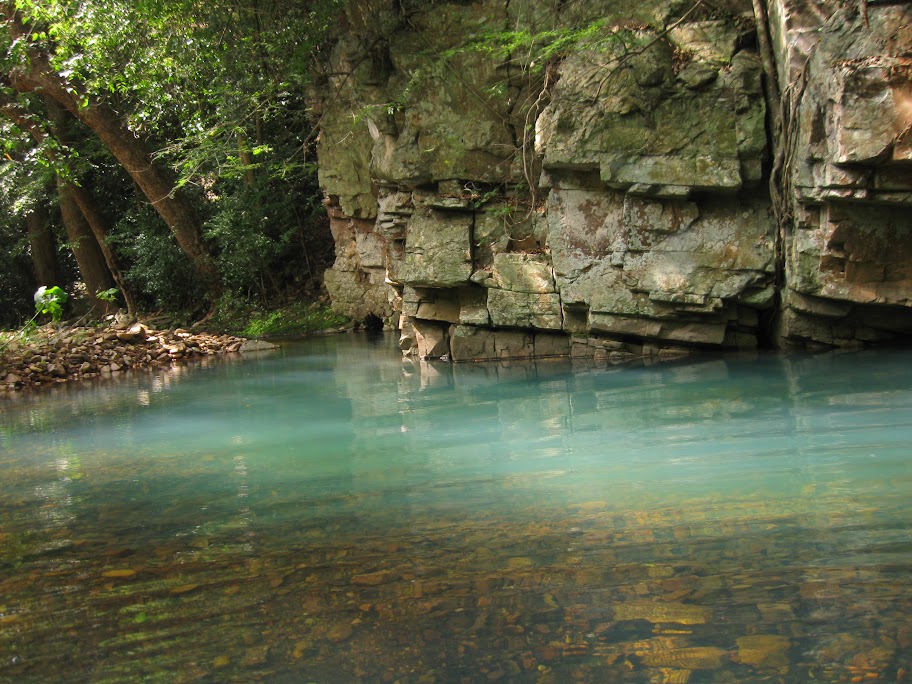 Well this also got us into a stream bed that we were to follow for some time. The stream ran dry until we hit another that joined it and had luscious clear water. The water we had was extremely clear and sweet to drink for the entire trip. Awesome stuff!!! Hopefully it will remain pristine for many more decades.

To cut a long story short, we followed the stream cross crossing it in many places. The team had started to split with the faster hikers ahead and the slower ones behind (many thanks to Sibin and Gowri to hike back and forth to keep us together). We stopped at a pool in the evening to re-join. It turned out to be a pool just above Angel Falls. We camped there for the night with a wonderful campfire, awesome food (Carrot halwa and two kinds of rice). Abdul, Sampath and Durai are to be commended for nifty cooking. Some folks stayed up to celebrate mid night with a cake.

Day 2 (Jan 01):
The next day we got down to Angel Falls. Spectacular is just beginning to describe it. We were prompt to jump into the water and enjoy a refreshing swim. The cameras were out in full force to capture the moment.

We continued to follow the stream and crossed many more pools. Some of which we enjoyed with a quick dip. We then stopped at V6 pool to have lunch. The V6 pool has pretty deep water and is surrounded by steep cliffs. One could launch 25-30 feet off the cliff into the water. Just utterly beautiful place! The only girl in the group was also entranced enough to take the leap off the edge (go Meenal!). 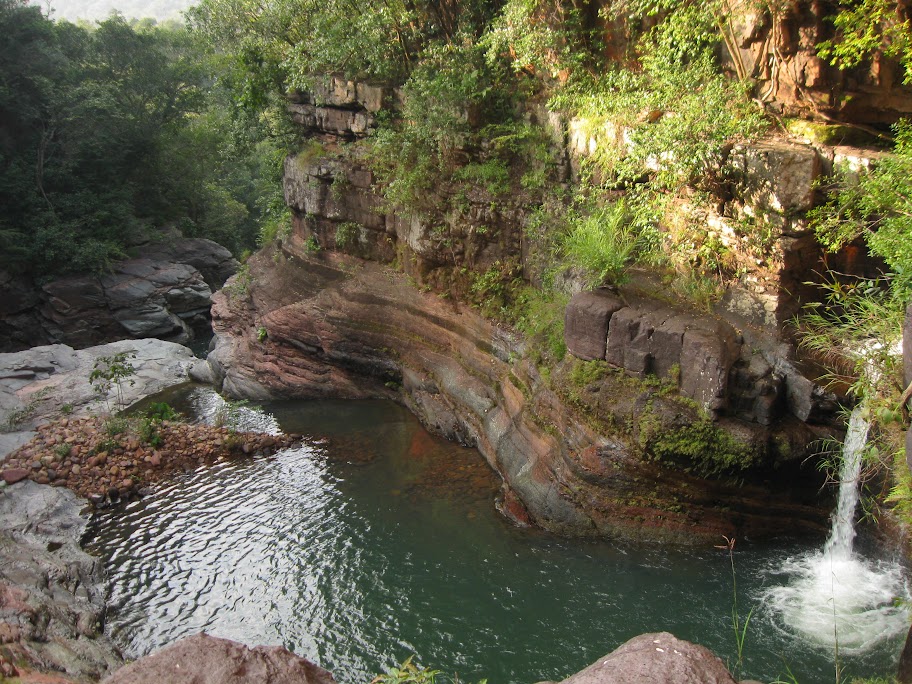 After lunch, the next stop was at Betel Leaf fall. On way we were to cross stream that was deep enough to submerge us to our necks, and also ferry our packs using makeshift rafts. The future Naval Archs (Kahan, Bala and Jayanthan) showcased their strong swimming skills by helping move the packs.

The Betel Leaf fall, had a step in between. This is where we hauled all our stuff and camped for the night. Another huge campfire and we cooked a HUGE amount of rice to eat. Folks with wet sleeping bags had gracious folks share their sleep ware for the night.

We were proceeding at half the speed that had been anticipated in the original plan.

To make up for the lost time, we left early in the morning — 6:30am. We had to traverse the same distance we had traveled the previous two days to get out of the forest. We tracked down a jeep trail after traversing the stream for a bit. This got us to a place that we had enjoyed lunch at.

We traversed through more beautiful country along side the stream. We reached the top of Step Falls (astounding damn place!), and struggled to get around it. By now it was starting to run out of sunlight. We had more food and had a couple of ferrying trips to get the luggage across. There had been a number of trips and falls by now. Some had cramps and others were feeling the physical exertion. 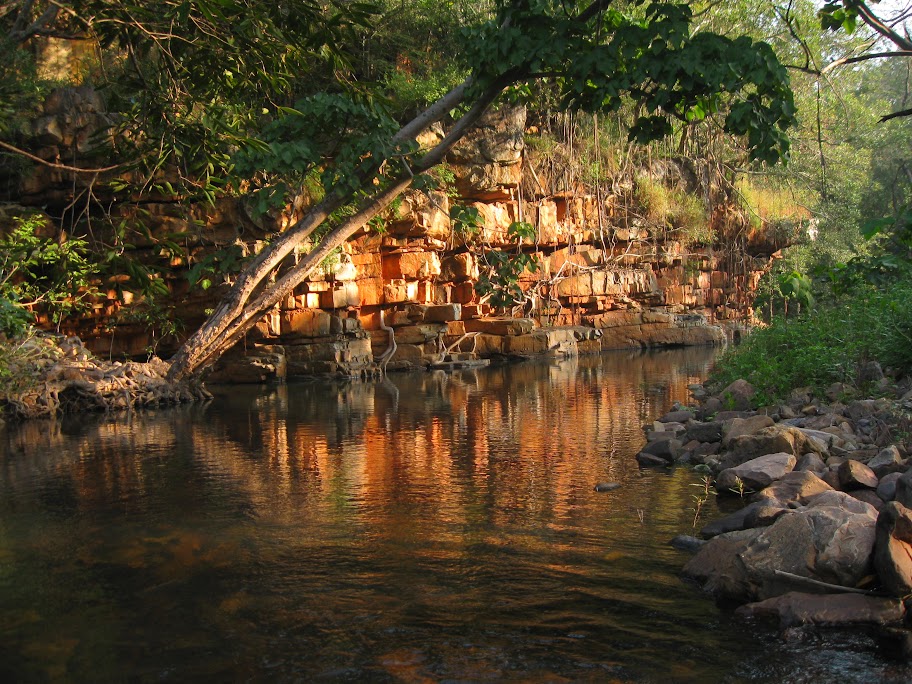 But we had to keep going to get out of the forest. We did not want to stay the night as most had appointments to keep the next day. We stumbled going across the stream — crossing from the left to the right bank. There were thorns tearing at our clothes and exposed skins. As darkness fell, the glimmer of hope was the number of torches at hand. Atleast no one had skimped on bringing a light!!!

The GPS and Gowri were are saviors as tumbled across the dark night (it was new moon night). To make matters worse, it rained and made the rocks extra slippery. More people fell and stumbled. We had to continually regroup and count to make sure no one was lost.

At 2am we finally neared a village after crossing another dam and a bunch of freshly ploughed fields. Our final gauntlet was to get across the village and its dogs — they were out in full force! The poor villagers are sure to have woken up with all that barking (sorry guys!).

At the Settigunta railway station (the village was a 1km away) we waited until a lorry driver stopped to take us home. A few got down in Renigunta to head to Bangalore and Hyderabad. The rest headed to Chennai for a much needed shower and sleep/work. 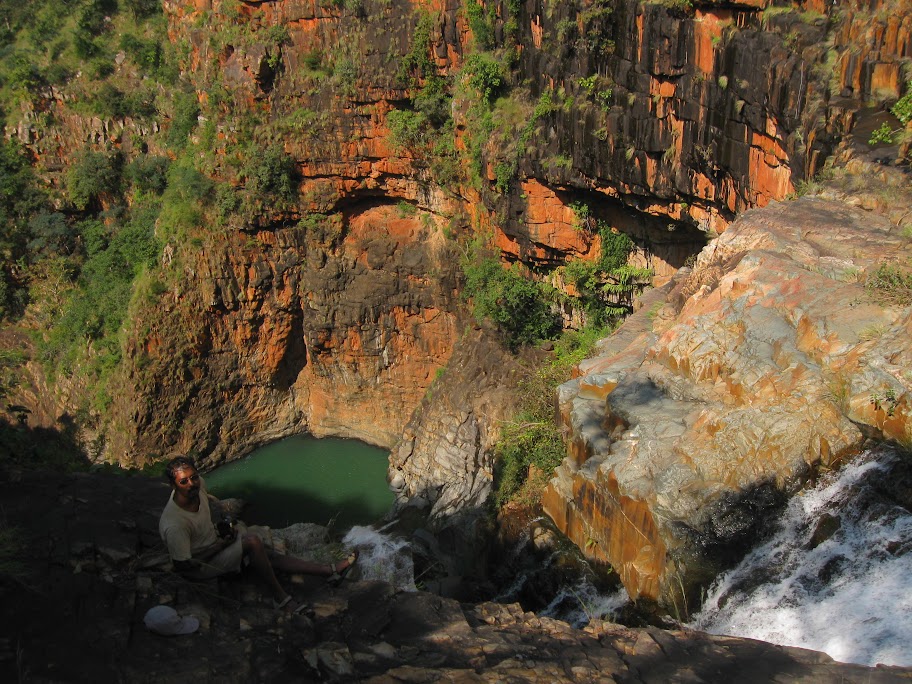 All in all, a memorable trip. Definite scope for improvement with how the trip was executed. But a lovely trek to a paradise that will remain in all our hearts forever.

Thank you to all you folks for your camaraderie, rising above your physical self to bring us back in one group with no calamity.