Skip to content
October 27, 2010 Peter Van Geit Leave a comment
We’ve read that man was a forest dweller; then invented the wheel; then he went on to set up civilizations and finally found the most comfortable ways to stay when he invented mega-cities with ultra-modern amenities, but in the process exploited the mother nature so ruthlessly. I decided to give myself a refreshing break and to be with Mother Nature over the weekend. I was planning to go for trek with CTC following a lot of recommendations and this was my moment of truth- “Nagari Combo 23rd and 24th October”. 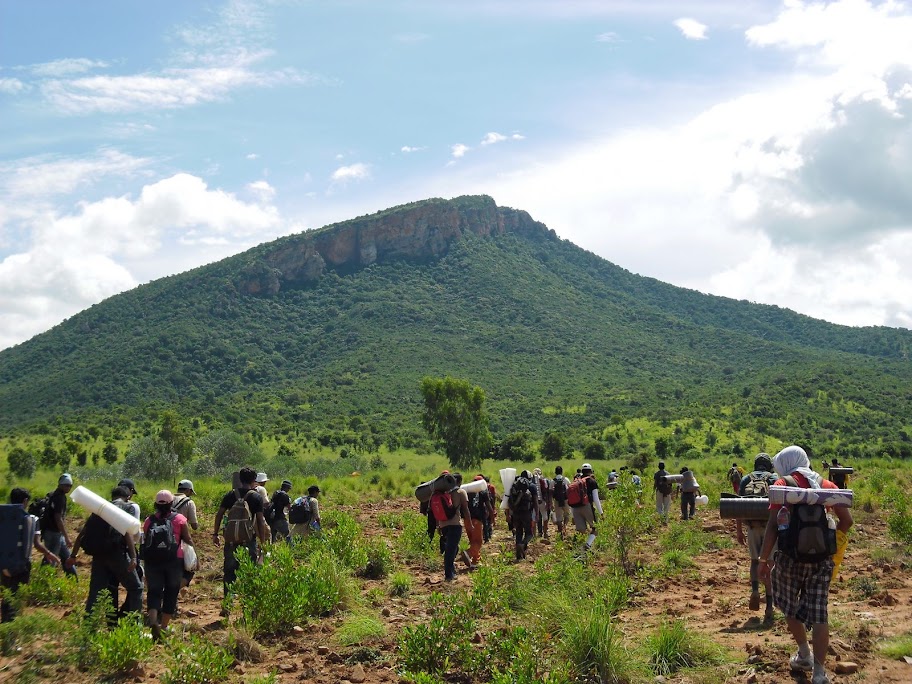 Preparation for the trek for me started with the search for a cap, thermorexine sheet, dichotomy between Eveready 300/- LED torch and 75/- China made one- swadesi or videshi??, a lot of posturing in front of office colleagues and a lot of excitement and a little bit of anxiety.
We met up at guindy at 0400hrs on 23rd and the process of making friends had already started. We proceeded to Koyembedu where everyone assembled to finally proceed to the spot. I saw Mr. Peter who is an enlightening sole. At 0900 hrs, we reached to a place where buses were parked and we walked to a place where breakfast was served to us. Thanks to the volunteers!
We started the trek at around 0930 Hrs when the sun was out with all its might. We were walking under the killing heat, brain was numb; lack of sleep; body egging for shade, mind for rest. Going up and down the hill; not sure about how much water to carry and each milliliter was like a tonne. Never the sound of silence was so clear when the bushes were rubbing against my hands and legs. We kept walking traversing all kinds of terrains- rocky, sandy, grassy. At this time I was feeling that someone has cheated me by saying that till level 1 its just a moderate walk :).

I was tying my bandana in all kinds of orientations to save myself from each and every ray of sunlight. OMG!! will I ever reach level 1 was the biggest question at this point in time. Hey…come on!! this was the first trek in a long while for my “not so disciplined” body. Sunlight was harsh and major part of the trek was not covered by trees. I gave up the idea to go to the next level, not because I simply could not but I could not afford to fall ill. Nevertheless it was a different experience. I was realizing the why Mr. Bear Grylls eats all kings of insects, vertebrates, invertebrates, fresh/ stale flesh and eggs along with calcium cover etc.
Hurray!! Finally I reached level 1. The place was fabulous. A small waterfall with a clean and beautiful pool below. We jumped into the water from adjoining rocks serving as a natural diving- board. The place had two temples on either sides of the stream. It was covered with trees with lots of monkeys having their eyes on our food stuff. We swam, screamed, clicked, and soaked ourselves in the cold refreshing water. Ingenuity was at its max when people were setting up camp-fire to cook noodles and soup. We got a very decent place to sleep in one of the temples. Spending a night in the jungle was awesome experience.

Next day morning we started back at 1100 Hrs. thankfully it was cloudy and the suddenly the route became “so easy”. Alas if it would have happened on the first day then I could have gone to level 5!! Haha. After returning to the base camp we rested and waited for others to come. The mountains looked threatening as the Sun was setting down and it was quite hard to believe that we were actually there!!
It was an exhilarating experience. The question coming to my mind again and again was: How close can man stay to the nature? Or is it fine to exploit it to the extent that we’ve done. So much of consumerism, so much of materialism… Definitely, it is not easy for a man to stay in a jungle forever, so whatever man did was it right? I hope the answer lies somewhere in between which I will try to discover.
Thanks CTC,
Akhil 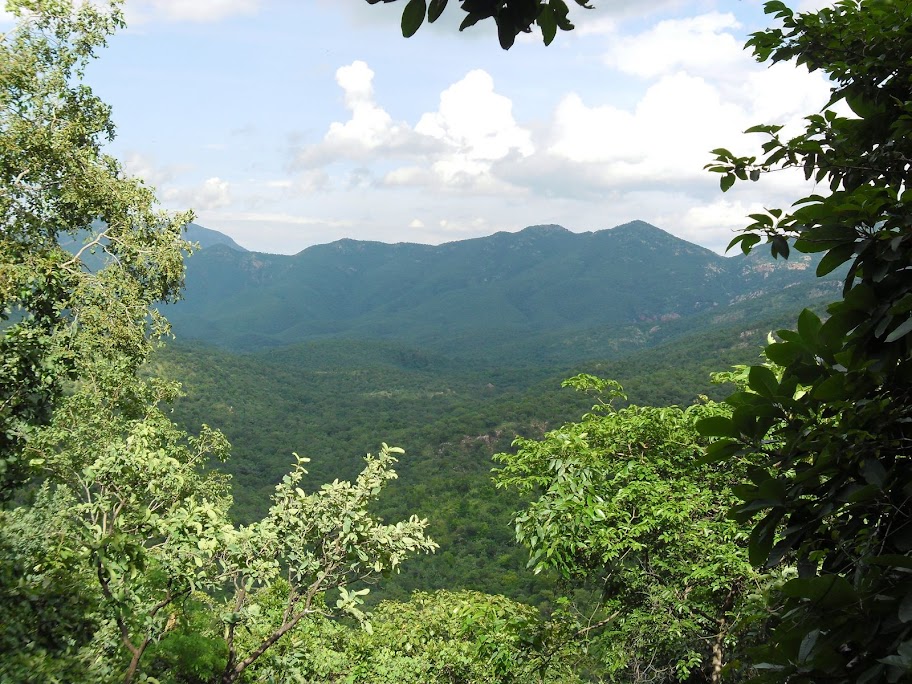 Thanks for the memorable 2-day Nagari Combo trek completed succesfully yesterday. The success is particularly great in terms of nearly 80 trekkers out of over 150 who have completed 3 out of 8 peaks or so on the range, which included the tallest one “Bird’s Beak” with the solar-powered red beacon light for cautioning pilots flying over the range. I believe in olden days before flights, the peak used to have a huge oil-lamp lighted daily by a family of “Thangaiyans” (who still live in the Vadamala village) to caution ships near the coast. The family now lights up the lamp only on full moon days, it is understood. The view of the Nagala hills, Tirupathi hills and the Nagari Nose and the valleys below from the peak were beautiful. Walking on the high grass meadows both below the waterfall and beyond Level 4 was an experience.
The level 3 campsite where we pitched our tents for the first day’s night was green and great with nice breeze wafting all through the night keeping all the tired trekkers well-rested during the night for the climb of the peaks on the following morning. The scramble over rocks near the peaks and the careful climbs on rockfaces at the edge of cliffs to get to the hill crests were tests of our skill, strength and caution. The weather on the first day was hot and sunny keeping us sweating and parched for most of the trek while on the second day the weather was cloudy and cool though the sweating during trek could not be relieved. After climbing the peaks on our way down after a refreshing dip in pool at the foot of the waterfall (Kailash Kona temple) the last leg of the trek to the village was a trudge over the 5-7 km long rock-paved and rock-strewn path, which was punishing for our tired feet and particularly toes. A dog from the village surprisingly kept us company all through the trek. 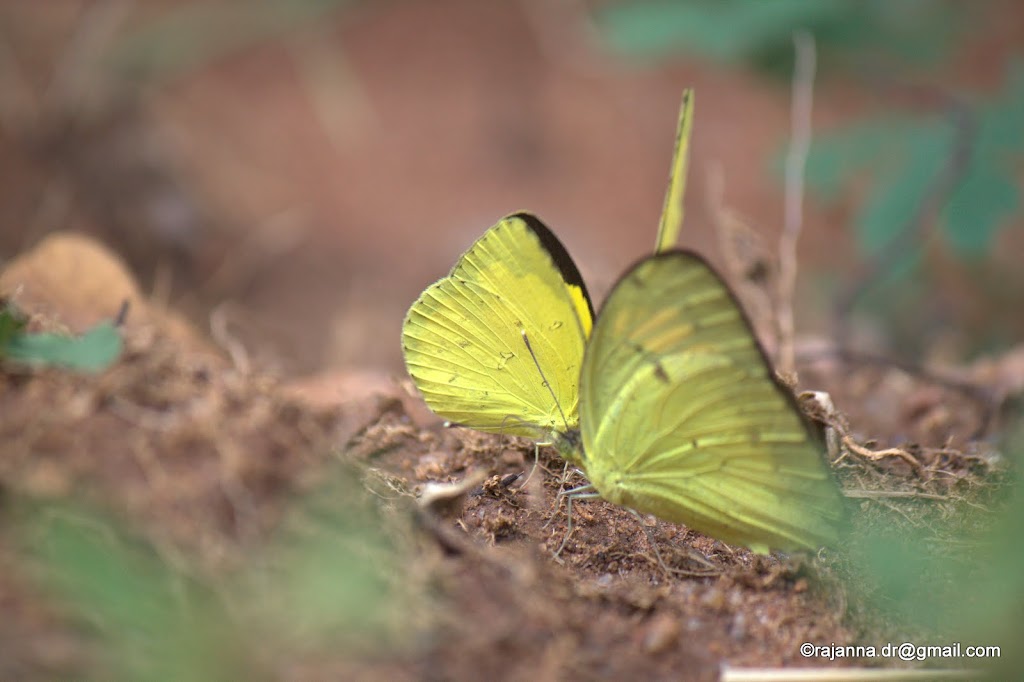 The only mishaps were the wasp-stings to about half-a-dozen trekkers at the Level 4 camp site including to one of the trek leaders “Karu”, of whom Karu and two others badly stung had to return from camp without climbing the peaks. Your dash to the top of the waterfall to avert a trekker’s slipping and falling down to the pool below boosted the morale of all the trekkers watching the operation though half-a-dozen trekkers shaken by the incident opted to return from this point.

All in all this trek was far better organised than the Nagala Combo trek possibly due to the lessons learnt during that trek with nearly 250 trekkers. Thanks for your meticulous planning as is normal in all the CTC treks to make the trek memorable, safe and successful. I look forward to your circulating all the photographs taken during the treks by the trekkers.