Skip to content
October 27, 2010 Peter Van Geit Leave a comment
This weekend CTC completed its largest ever trek in its history – around 195 trekkers ventured out to Nagari – a beautiful, less known mountain range located between Nagala and Venkateswara.
A combo trek is meant to adhere to trekkers of all levels – both freshers and experienced – allowing each person to trek up to a different level of difficulty based on his/her individual fitness and comfort level. I initiated the combo trek recently as several freshers in CTC kept telling me that they were unable to get shortlisted for our usual limited headcount difficult treks organized periodically by myself and other organizers. To join these latter treks typically requires for a reference to a previously completed moderate/difficult CTC trek – basically shortlisting based on proven fitness level normalized within our group. A combo trek allows anyone to join and try to reach any level and prove he or she is ready to take on more challenging missions with smaller groups. 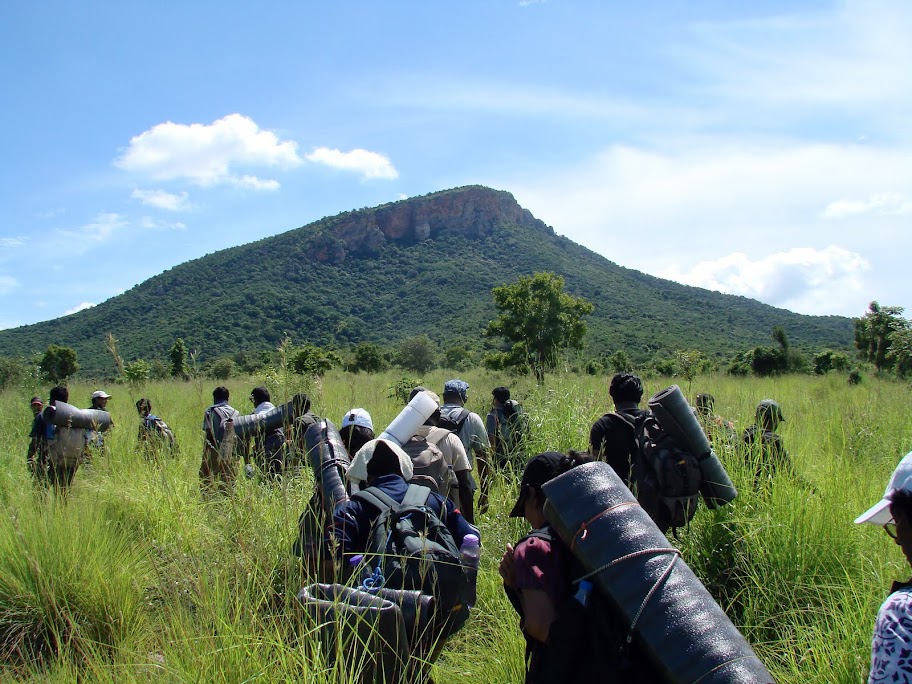 Managing such a large and heterogeneous (a large % are first time trekkers) group obviously remains a challenge for the limited number of core members who participate in the trek. As usual a combo trek does not proceed perfectly as planned. We had several sub groups getting temporarily lost during the entire course of the trek (which I believe adds to the adventure). This time we also eliminated the sub-grouping (e.g. 4 groups each with one lead) we used in the Nagala Combo last month and allowed everyone to proceed freely within one, large group along a trail marked by ribbons.
Approx headcount at each level

Level 1
After a one hour delayed start from Chennai (quite a few people came in late) around 6:30am we joined our colleagues from Bangalore and other out station locations who directly came to Vadamalpet. After parking the vehicles at a mango farm, having yummy breakfast and distributing the food rations we started towards the base of the hills around 9:30pm. The main challenge during the first day was the hot sun scorching above us in this initial 10km open stretch with a few moderate uphill climbs and no water along the trail. While sweeping the back we lost short of 1 hour to recover around 20 trekkers who had ventured in the wrong direction. Most trekkers had reached the temple after lunch and immediately jumped into the refreshingly cool water in the stream and pool. Around 90 trekkers decided to camp near this scenic spot. 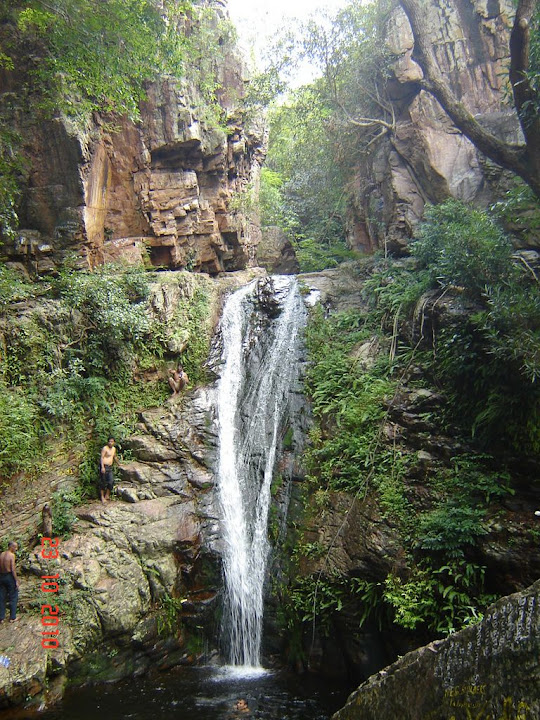 Level 2
After finishing lunch, a first group started towards level 2 climbing above the falls near the temple. One trekker slipped near the top of the 20 feet high falls and luckily could hang on till he was rescued. There was some confusion as the group initially proceeded along the wrong stream up the hill. A while later we started the steep climb towards level 2 with a second group and recovered some trekkers who had been diverted along the wrong stream. We reached campsite 2 at 450m altitude in the late afternoon where we regrouped while waiting for many trekkers who took more time to climb up to this level. Meanwhile we heard that Thilak had hurt his leg while helping out a fellow trekker and had to exit Nagari with a jeep the next morning. 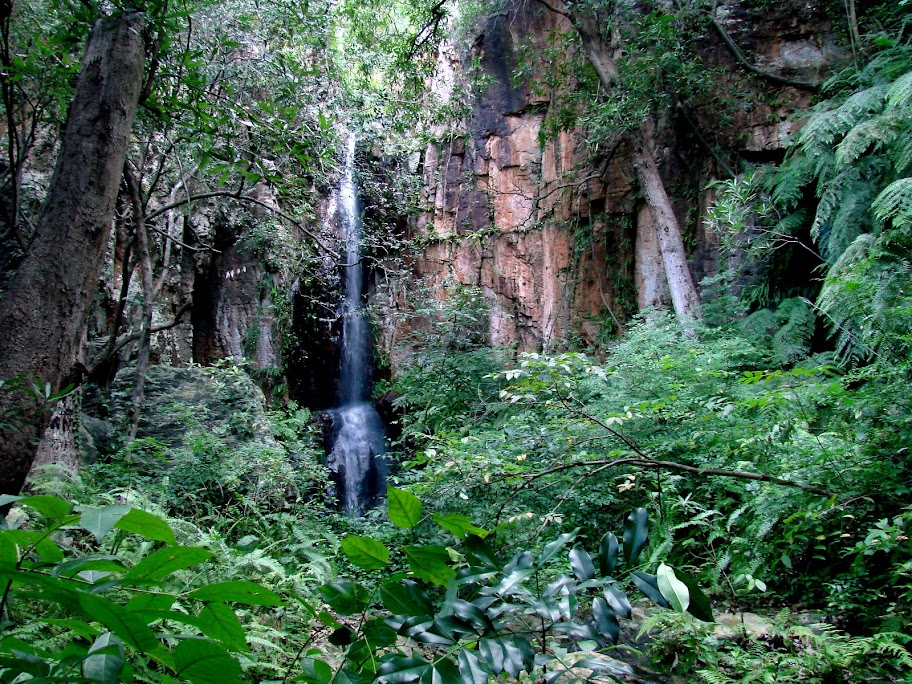 Level 3
As trekkers kept appearing at level 2, we decided to send off a first group towards campsite 3 at 800m altitude, a steady 1.5-2 hour uphill climb, while waiting for those who were still following. Around 1 hour before darkness we sent off a second group towards level 3 while myself and a few organizers stayed at level 2 to accommodate more trekkers who kept appearing after the steep climb from level 1 till darkness. The night at campsite 2 was challenging with soup no pot to cook and a massive attack by black ants around 11pm 😉 The second group climbing up got lost in the dark on the way to level 3 and took some time to finally reach campsite 3.

Level 4
The next morning, most trekkers (around 20) at camp 2 decided to take a U turn with few proceeding towards level 3. Around 55 trekkers at camp 3 decided they had reached their limit and decided to start walking back down later in the morning. A first group of trekkers left camp 3 early morning to scale the Nagari peak. A few trekkers walking in the front were attacked by wasps along the way, some of them severely and had to return back. Initially the trail went along a stream with water but soon both the trail and water disappeared. I took a second group around 1 hour later and caught up with the first group at the base of the peak. From here again a few trekkers returned due to either lack of water or being exhausted. Around 30 trekkers proceeded forward to scale the Nagari 1053m peak (1053m) from where was the clouds below us climbing up from the valley below at the Southern side. Nearly all proceeded further to scale a 2nd peak where we discovered a solar powered light beacon used to warn flights in the night from the nearby Renigunta airport. Later in the morning the clouds at the Southern side dissolved and cleared up the near-vertical view on the valley nearly 600m below. What a view !!! 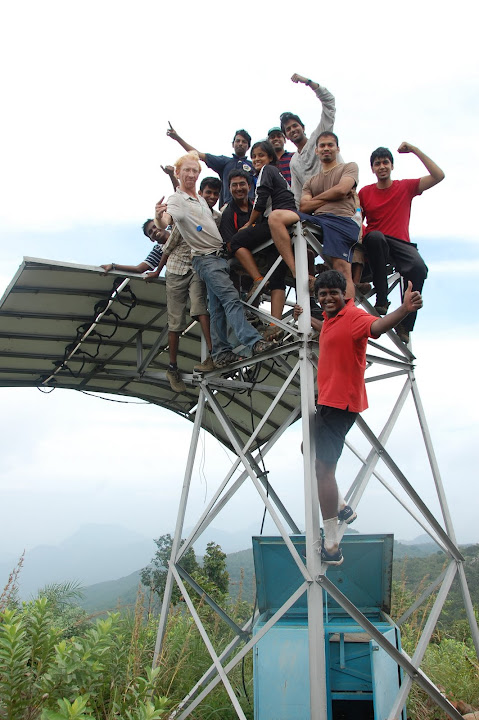 Return
The return from levels 4, 3, 2, 1 was spread across the day with trekkers appearing back at the base of the hill from 6pm till 10pm…. A number of people missed a diversion along the trail and took a different (shorter!) way out of the Nagari hills towards the Southern base from where they caught a bus towards Vadamalpet. I exited with the last gang of level 4 trekkers along the Western exit around 9pm after singing Hindi songs under a full moon. The 2nd bus did not leave until 10pm after we recovered another 17 trekkers at the Southern base with 3 cars 😉 The end of yet another eventful but no doubt awesome weekend. The last of us reached Chennai around 2am the next morning, exhausted but more refreshed then ever….

Thank you
As usual each CTC trek is made possible due to the selfless efforts of many volunteers behind the scenes. I sincerely thank Alex/Meena for spending late nights in handling the online transfers required to pay for advance buying of food and renting transportation. Thank you Thilak and Aravind for your relentless efforts in arranging the food for this huge group. A big thanks to Diwakar who spent significant time in arranging the 2 buses required to transport all trekkers to the base and back home. Big thumbs up to Ramjan for managing the big group joining from Bangalore. Thanks to the organizers managing the attendance, expenses collection and disclaimers at the various pick up points – Diwakar, Thilak, Max, Guru, Vadivel, Ela, Ajay, Vadivel, Karmu, Alex, Meena, Bala and Hari. My appreciation towards Ajay, Ramzan, Karmu, Max, Ramesh for leading the front group to the various levels while myself, Thilak, Bala, Vadivel were focusing on the back and middle sections of the group. Thank you Bala for taking care of Thilak after he hurt his leg and had to be taken out on Sunday morning. Thanks to Ela for managing the trek accounts. My appreciation to the many others whom I missed out here and contributed in their own selfless way to this trek. Special credit goes to our most senior participant Mr Chandra (60 years) and our youngest (11 years). And last but not least – thanks to all of you for participating in this trek and made this yet another awesome CTC-style weekend.

Photos, experiences, feedback
As usual participants are welcome to share their stories with the group in our forum –